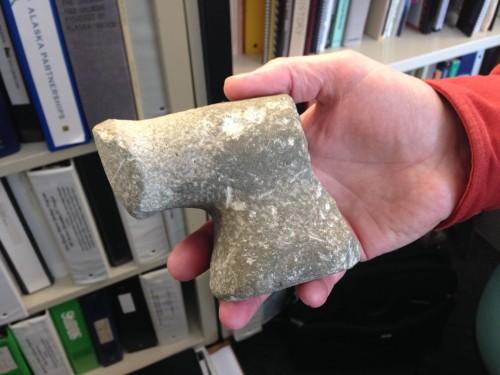 Archaeologist Jay Kinsman says some of the lighter-colored scarring was caused by the churning of the landslide. (KCAW photo/Robert Woolsey)

Against unbelievable odds, a pair of Forest Service hydrologists mapping the Starrigavan slide found a curiously-shaped rock amid the thousands of tons of rubble. They recognized it instantly as a prehistoric stone tool.

Some finds in archeology are made through careful research and painstaking excavation. But some finds are just an unbelievable stroke of luck.

I’m Jay Kinsman, archeologist for the Forest Service in the Sitka and Hoonah Ranger Districts, and what I’m holding is a t-shaped handmaul. Basically, a prehistoric hammer.

The Starrigavan Valley made headlines last September, when heavy rains brought down over 100 acres of the mountainside in three distinct slides. Starrigavan is about 8 miles from downtown Sitka. A prime watershed, Starrigavan was home to monster stands of spruce and hemlock until it was logged in the early 1970s. The Forest Service has done extensive habitat and stream restoration work in the valley recently — much of which was wiped out by the slides.

Hydrologist Marty Becker was one of the first Forest Service personnel to assess the slide when the area was still considered unstable. He and fellow hydrologist KK Prussian had returned this February to do some geological mapping in safer conditions, when they found the hammer.

“KK was just taking some final notes, so I had a little time and I walked up on the base of the slide to take a better look at it. When we had first gone out there I was sinking up to my knees. It had set up by this point, and I was able to walk on it. I was looking at some rocks — picking up some cool ones to give to my kids — and I noticed this rock that was kinda funny-shaped.”

The handmaul is L-shaped, with each leg about three inches long. It used to be T-shaped, but at some time one arm of the T broke off. Nevertheless, paleolithic and later cultures were not quick to dispose of things that still had utility, even if they were broken. Becker realized immediately that this rock was custom-made. 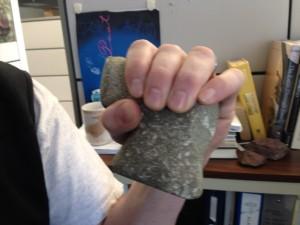 “And I noticed it felt real comfortable in my hand. Like it just fit perfectly. I brushed it off, took a closer look, and realized what it was.”

This kind of T-shaped handmaul is not particularly rare in Northwest Coast archeology — but it is uncommon in the Sitka area. This is only the third of its kind found locally. One other was found by a trail crew at Salmon Lake, another was found near Hoonah.

Edward L. Keithahn, in a 1962 article for the journal “American Antiquity,” says this type of hammer was most often associated with sites that also had petroglyphs, or stone-carved artwork found along the coast. But since this particular tool came down in a landslide far from shore, Jay Kinsman has another theory about how it might have been used.

“My guess is that it would have been used for harvesting cedar. One of the many uses of cedar was as planks. And there was just a tremendous amount of cedar on that slope that came down.”

Kinsman says someone would have used the maul to drive wedges made from a softer material like wood, antler, or bone into yellow cedar trees to split off planks. And as for caching heavy tools on a mountainside, Kinsman says trail crews do the same thing to this day while a job is in progress.

What’s not clear at all — and may never be — is just how old the hammer is. Typically, archeologists date stone and other inorganic objects by dating the carbon-based materials in the sediments in which they’re found. The Starrigavan landslide gave up this object quite miraculously, but at the cost of separating it from its original surroundings. That means we may never really know who made it. There are known archeological sites in the area, ranging in age from 300 to 1200 years old. Iron tools were introduced in Southeast to the Tlingit and Haida in the mid 18th century, but a serviceable stone tool might have been used indefinitely. It could be much, much older. All we know is that at some time in the remote past, a human painstakingly made this object and set it down on a mountainside. Much later, another human — a Forest Service hydrologist — was standing on a mountain of rubble, and was compelled to pick it up.

Jay Kinsman says this is at the heart of what he does.

“As archeologists that’s one thing that we learn. We train our eye to pick out those things that aren’t quite natural, or are different from the natural environment.”

The T-shaped handmaul is protected by a number of federal laws, starting with the US Antiquities Act. Kinsman says it will become a part of the collection of the Museum of the North at the University of Alaska, Fairbanks, but could likely end up on permanent loan to an entity in Sitka for display.