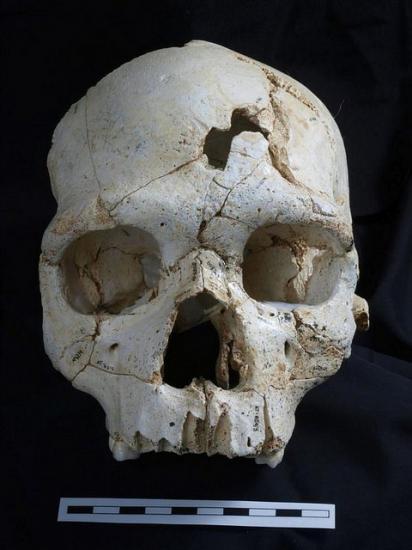 This is a frontal view of Cranium 17 showing the position of the traumatic events T1 (inferior) and T2 (superior). Courtesy Javier Trueba / Madrid Scientific Films

An international team of scientists have uncovered what they suggest is a likely case of murder some 430,000 years ago among prehistoric humans living in what is present-day northern Spain.

Their evidence derives from a forensic analysis of an ancient skull belonging to a young adult individual whose lineage was possibly related to an early Neanderthal line, ancient 'cousins' of modern humans. The skull, called ‘Cranium 17’ by researchers at the Sima de los Huesos  (SH) cave complex in the Atapuerca Mountains of northern Spain, was recovered and pieced together from 52 fragments over a period of 20 years. It was found and studied among an assemblage of over 6700 bones representing at least 28 individuals.

Led by Nohemi Sala from Centro Mixto UCM-ISCIII de Evolución y Comportamiento Humanos, Spain, the team of researchers examined the skull using modern forensic techniques, including stereoscopic light and digital microscopes, an industrial CT scanner, 3D imaging technology, and contour and trajectory analysis. The scientists focused on two peculiar penetrating lesions on the frontal bone above the left eye. They were unlike many of the bone fractures on the other bones recovered from the site, which by examination were shown to have been caused by geological process disturbances or as a result of having fallen down a vertical shaft into the cave, perhaps by accident. But the results of the study on Cranium 17 indicated that both fractures were likely produced by two separate impacts by the same object with slightly different trajectories, around the time of the individual's death. According to the researchers, the injuries were unlikely the result of an accidental fall down the vertical shaft. Rather, the type of fracture, their location, and the appearance of having been produced by two blows with the same object, led the researchers to interpret them as the result of an act of lethal interpersonal aggression—or what may constitute the earliest case of murder in human history. 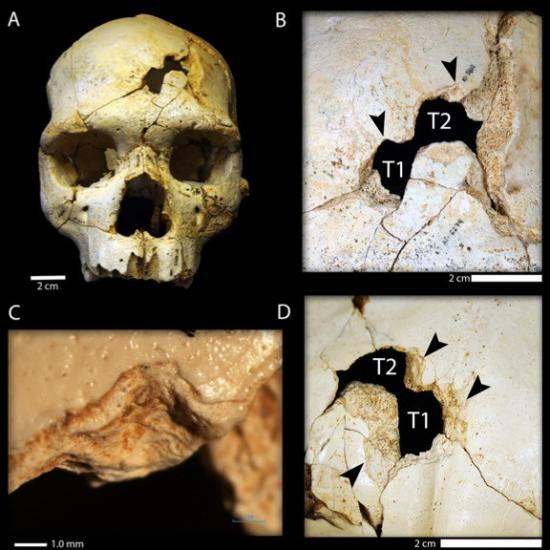 The Cranium 17 bone traumatic fractures. (A) Frontal view of Cranium 17 showing the position of the traumatic events T1 (inferior) and T2 (superior); (B) Detailed ectocranial view of the traumatic fractures showing the two similar notches (black arrows) present along the superior border of the fracture outlines. Note that the orientation of the two traumatic events is different; (C) Detail of the notch in T1 under 2X magnification with a light microscope. (D) Endocranial view of T1 and T2 showing the large cortical delamination of the inner table (black arrows). From Sala N, Arsuaga JL, Pantoja-Pérez A, Pablos A, Martínez I, Quam RM, et al. (2015) Lethal Interpersonal Violence in the Middle Pleistocene. PLoS ONE 10(5): e0126589. doi:10.1371/journal. pone.0126589

“This represents the earliest clear case of deliberate, lethal interpersonal aggression in thehominin fossil record,” stated Sala, et al. in the study report, “demonstrating that this is an ancient human behavior.”*

Moreover, the study results indicated that the individual was already dead before arrival at the cave site, suggesting that the person was carried to the top of the vertical shaft of the cave and deposited by other humans. Given the nature, position, abundance and condition of human bones found within the cave, “the interpretation of the SH site as a place where hominins deposited deceased members of their social groups seems to be the most likely scenario to explain the presence of human bodies at the site,” wrote the study authors in the report. “This interpretation implies this was a social practice among this group of Middle Pleistocene hominins and may represent the earliest funerary behavior in the human fossil record.”*