Archaeologists believe they have found the first pre-Roman planned town discovered in Britain.

It has been unearthed beneath the Roman town of Silchester or Calleva Atrebatum near modern Reading.

The Romans are often credited with bringing civilisation to Britain - including town planning.

But excavations have shown evidence of an Iron Age town built on a grid and signs inhabitants had access to imported wine and olive oil.

Prof Mike Fulford, an archaeologist at the University of Reading, said the people of Iron Age Silchester appear to have adopted an urbanised 'Roman' way of living, long before the Romans arrived.

"It is very remarkable to find this evidence of a planned Iron Age layout before the arrival of the Romans and the development of a planned, Roman town," he said.

"Indeed, it would be hard to see a significant difference between the lifestyles of the inhabitants of the Iron Age town and of its Roman successor in the 1st Century AD."

He said they seem to have been drinking wine and using olive oil and a fermented fish sauce called garum in their cooking, all imported from abroad.

Silchester is famous for the most complete Roman town walls in Britain.

After the Roman invasion, the town was used by its military, and there is evidence that Roman buildings were very swiftly built on top of Iron Age structures.

Prof Fulford believes that shortly before this, the town may have been taken over by the British Iron Age chieftain Caratacus - a leader of the Catuvellauni tribe - as his stronghold. 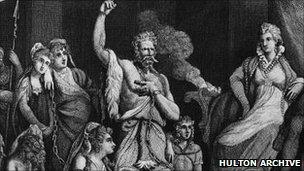 The evidence comes from coins minted by Caratacus in the area.

"Both their tight distribution in central southern England and their style point to Calleva as being the source of Caratacus' coins," he said.

Caratacus was a hero of the British resistance to Roman rule. He famously took on the invading Roman army at the Battle of Medway and after his capture was taken to Rome where he appeared so fearless that the Emperor Claudius was moved to spare his life.

As for the fate of the Roman town, a scorched layer within the archaeology suggests that it was actually burnt to the ground, and seems to have been abandoned for about 20 years.

It is possible that this destruction was carried out by the Queen of the Iceni tribe, Boudicca, or at least at the time of her anti-Roman rebellion in 60 - 61 AD. 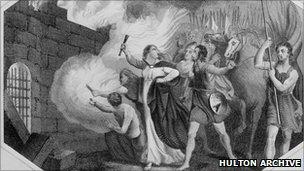 Queen Boudicca burnt down the city of London but did she burn Silchester too?

It is known from the Annals of Tacitus that Boudicca and her army laid waste to the Roman towns of Colchester (Camulodunum), London (Londinium) and St Albans (Verulamium), but could Silchester have been a fourth, previously unknown Roman settlement to fall victim to Boudicca's rebellion?

If these theories are correct, then within a single generation Silchester went through a period of turbulent evolution from a prosperous and sophisticated Iron Age town, to being under direct Roman army control to being burned to the ground and deserted.