The Giants of Wessex 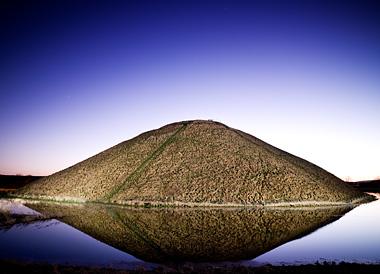 Recent scientific dating programmes on the three largest mounds in Wiltshire in southern Britain allows the chronology of these prehistoric monuments to be better understood. Silbury Hill (Figure 1), at 31m high the largest prehistoric mound in Europe, was the focus of a multi-million pound archaeological and conservation project after a cavity opened up on the summit in 2000 (Leary & Field 2010; Leary et al. in press).

Following this fieldwork, cores were taken to determine the date of the 18m high Marlborough Mound, just 8.3km to the east of Silbury Hill (Figure 2). These cores were inserted centrally from the summit to the base, analysed and dating material was retrieved (Leary et al. forthcoming). The third mound, the Hatfield Barrow located within Marden henge in the Vale of Pewsey, is said to have been as much as 15m high, although it is now demolished. However, recent excavations within the henge enclosure have revealed that a thin remnant of the mound has survived and material suitable for dating was recovered from it (Leary & Field 2012). 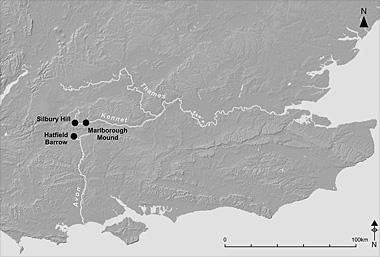 Figure 2. Location map showing Silbury Hill, the Marlborough Mound and the Hatfield Barrow, as well as the rivers Kennet and Avon.

Figure 3 shows key parameters from chronological modelling at Silbury Hill (Learyet al. in press) and the ongoing work at the Hatfield Barrow as well as calibrated dates from samples from immediately beneath and within the main body of the Marlborough Mound (Leary et al. forthcoming). The sequence of radiocarbon results from the Marlborough Mound has not been modelled, unlike the estimates for major archaeological events at Silbury Hill and the Hatfield Barrow, due to the samples being single fragments of charcoal. This work has shown for the first time that all three of these monumental mounds date to the second half of the third millennium cal BC, and all three mounds could be contemporary. The greater precision provided by chronological modelling of the Silbury Hill and Hatfield Barrow dates suggest these two monuments in their initial incarnations were built in the twenty-fifth century cal BC. Silbury Hill appears to have been completed within a few generations of this. 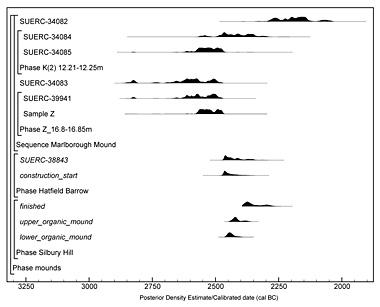 Figure 3. Probability distributions of dates from the Marlborough Mound and estimates of major archaeological events from Silbury Hill and the Hatfield Barrow..

The extensive recording work at Silbury Hill has shown that the mound was created in numerous phases, highlighting the importance of the process of construction as much as the form. The stratigraphy from the Marlborough Mound cores represents a similar multi-phase process, and this is supported to some extent by the dates. Unfortunately, due to the demolition of the Hatfield Barrow in the nineteenth century, we do not have comparable data for its completion; a posthole cutting the remnant material suggests that this mound was to some degree also multi-phased. Further work on the unexcavated ditch surrounding Hatfield Barrow may provide fresh data to help elucidate its sequence.

All three mounds are located next to a river: Silbury Hill and the Marlborough Mound are alongside the River Kennet, the Hatfield Barrow was next to the River Avon. As argued elsewhere (Leary & Field 2012; Leary & Field 2010; Leary et al. in press) the low-lying location of these mounds and their association with rivers is of significance, perhaps marking routes and highlighting rights and belonging, as well as emphasising a possible metaphysical link.

Clearly, the area and period witnessed mound building (as well as the construction of other monument types) on a scale unknown before or after. It is interesting to note that this highly intensive activity, which also includes the first major phase of stone settings at Stonehenge (Darvill et al. 2012), coincided with the arrival of the earliest English Beakers (papers in Allen et al. 2012; Fitzpatrick 2011). Whilst there is much we do not understand about the introduction of the 'Beaker package' to Britain, as previously suggested (Bayliss et al. 2007; papers in Allen et al. 2012), it seems highly unlikely that the occurrence of these truly colossal and largely novel monuments was coincidental; we would contend that the introduction of new materials, new people and new lifeways are related to the erection of these monuments, perhaps as an assertion of power in the face of innovation.

We are grateful to all those involved in these projects. Jim Leary wrote his contribution during sabbatical leave from English Heritage as the 'Field Archaeologist in Residence' at the McDonald Institute for Archaeological Research, Cambridge University. Both English Heritage and the McDonald Institute are warmly thanked. Eddie Lyons is thanked for producing Figure 2.