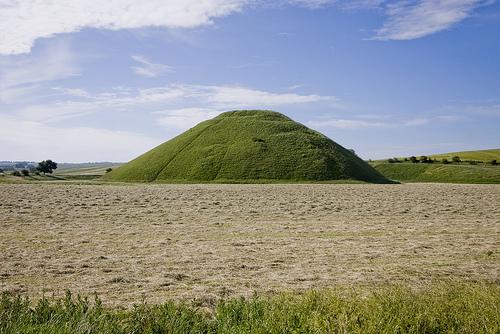 Standing 30 metres high and 160 metres wide, Silbury Hill in England is one of the world's largest man-made prehistoric mounds. It was constructed in the Neolithic, about 25 kilometres north from Stonehenge.

It is estimated the construction of Silbury Hill involved half a million tonnes of material and around four million man-hours of work – equivalent to about ten years for a crew of a hundred people working 7/7 for more than ten hours a day.

New and more precise dating of materials found inside the hill now suggests the main construction happened in about 100 years, involving some three generations between 2400 and 2300 BC  – right after nearby Stonehenge's thirty enormous sarsen stones were put in place.

But new evidence is increasing telling us that our Neolithic ancestors display an almost obsessive desire to constantly change the monument – to rearrange, tweak and adjust it. It’s as if the final form of the Hill did not matter – it was the construction process that was important.

Early 2000, a large hole suddenly appeared on the top of Silbury Hill. It was soon clear what had happened: the head of an old excavation shaft, dug in 1776 to penetrate to the heart of the monument, had begun to collapse. Archaeological examination of the freshly exposed deposits showed that the top of the shaft had slumped and been filled up again several times before. In other words, the collapse was a recurring problem.

Shortly after, English Heritage began a multi-disciplinary research and restoration programme which led to some intriguing discoveries.

The survey suggests the prehistoric mound is not in fact truly circular: on the summit it appears to be more angular than circular, while at the base it is almost octagonal in form.

It is possible a spiralling ledge led up to the mound – if so, this makes good sense in terms of access routes during the construction of the monument, and perhaps ritual processions to the summit.

The research has also shown that Silbury Hill was at the centre of a Roman-British settlement – to the east and south, straddling the now nearby A4. Much pottery and other artefacts of this period have been found on and around the mound in the past. Indeed, the monument itself may have acted as a focus for the settlement and it could have been considered as sacred in the Roman period as when originally constructed.

Later, in the medieval period, the top of the hill was flattened and a building – possibly defensive – was constructed on the summit. 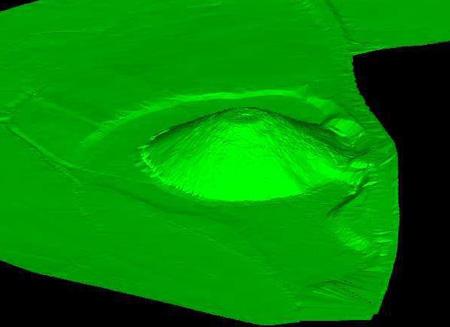 Placed on the junction of a chalk spur and the valley floor, Silbury Hill is integrally related to the springs and rivulets close to the source of the River Kennet. - Copyright: English Heritage, credit David Field 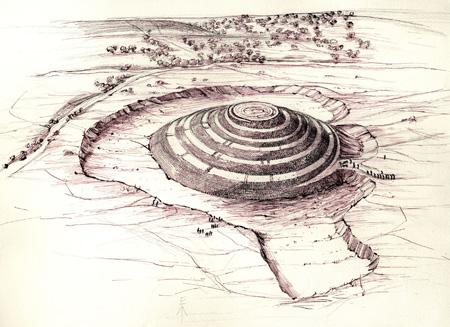 The digital model derived from the 2007 ground survey of Silbury Hill shows traces of what appear to be spirally arranged construction or access terraces and a prominent platform (centre) situated towards the base of the mound facing south-east. This is an artist's impression of Silbury Hill showing a spiral method of construction, possibly used for access to summit. - Copyright English Heritage, Picture Credit Judith Dobie

The Story of Silbury Hill

In the new book The Story of Silbury Hill, published by English Heritage, all this emerging evidence has given rise to a radical new theory: Silbury Hill was not a single construction project and that the builders did not have any blueprint in mind. Instead, the creators were building the mound as part of a continuous storytelling ritual and the importance of the shape that we see now is of secondary importance.

Jim Leary, English Heritage archaeologist and co-author of the book, explains: “Most interpretations of Silbury Hill have, up to now, concentrated on its monumental size and its final shape. It has generally been thought to be a concerted effort of generations of people building something out of a common vision and spiritual zeal akin to that that spurred the creation of soaring medieval cathedrals. The flat top, especially, was often seen to be a “platform” deliberately built to bring people closer to the skies.

“But new evidence is increasing telling us that our Neolithic ancestors display an almost obsessive desire to constantly change the monument – to rearrange, tweak and adjust it. It’s as if the final form of the Hill did not matter – it was the construction process that was important.”

This interpretation challenges mainstream Western way of viewing ancient monuments as “architecture” or structures that have a defined grand plan and purpose.

Further, analyses of the material composition of the mound have revealed that chalk, stones, gravel and antler picks were consistently used in an ordered fashion and combined in different ways to yield discrete patterns, textures and colours.

“The most intriguing discovery is the repeated occurrence of antler picks, gravel, chalk and stones in different kinds of layering, in ways that suggest that these materials and their different combinations had symbolic meanings,” Jim Leary says.

“We don’t know what myths they were representing but they must have meant something quite compelling and personal. What we do know is that by the time work on the hill had started in the later Neolithic period, the surrounding area was already saturated with evidence of past use; it was a place that was heavily inscribed with folk memories that recalled ancestors and their origins.”

“What is emerging is a picture of Neolithic people having the same need to anchor and share ideas and stories as we do now, and that built structures like Silbury Hill may not be conceived as grand monuments of worship but intimate gestures of communication.”

Silbury Hill has now been restored to as near its original condition as possible. All the known voids inside the prehistoric mound, and the crater on the summit, have now been re-filled – which took about 1,465 tonnes of chalk.