GeoAcoustics has launched Sonar 2094 Digital. A series of seminars and demonstrations were held by Simrad Spain, the local Kongsberg office, in November and December of the past year for their naval, scientific and industry customers. The capabilities of this technology for environmental mapping, engineering and archaeology surveys as well as object detection and classification were shown in various places along the Mediterranean coast. 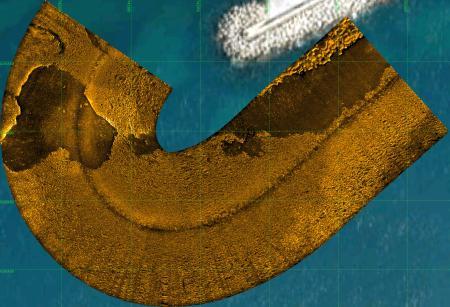 Entrance of Villajoyosa marina with breakwater and meadows of Posidonia Oceanica sea grass, which plays a key role in the Mediterranean ecosystem.

Sonar 2094 Digital is the successor of the Dual Frequency Side-scan sonar, which was first launched in 1996 and developed into an industry standard, with over 1,000 units sold worldwide. Sonar 2094 Digital combines the system's ease of operation and reliability with latest digital technology, which allows simultaneous acquisition of the 114kHz and 410kHz data channels with pioneering 24 bit resolution. It was also demonstrated that the sonar has a 30% wider range than its predecessor, up to 150m for 410kHz per side. This is achieved using digital oversampling techniques.

A 2,000m rated system was purchased by the Spanish Ministry for Environment, Rural and Marine Affairs and is due to be commissioned on R/V Vizconde de Eza for carrying out environmental mapping for fishery research.