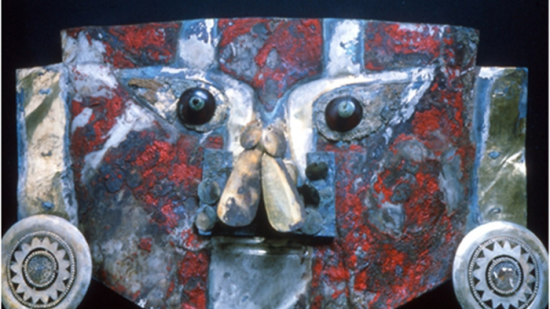 A red paint sample taken from a 1,000-year-old mask excavated from a Sicán tomb in Peru contains human blood and bird egg proteins, in addition to a red pigment. CREDIT Adapted from Journal of Proteome Research 2021, DOI: 10.1021/acs.jproteome.1c00472

Thirty years ago, archeologists excavated the tomb of an elite 40–50-year-old man from the Sicán culture of Peru, a society that predated the Incas. The man’s seated, upside-down skeleton was painted bright red, as was the gold mask covering his detached skull. Now, researchers reporting in ACS’ Journal of Proteome Research have analyzed the paint, finding that, in addition to a red pigment, it contains human blood and bird egg proteins.

The Sicán was a prominent culture that existed from the ninth to 14th centuries along the northern coast of modern Peru. During the Middle Sicán Period (about 900–1,100 A.D.), metallurgists produced a dazzling array of gold objects, many of which were buried in tombs of the elite class. In the early 1990s, a team of archaeologists and conservators led by Izumi Shimada excavated a tomb where an elite man’s seated skeleton was painted red and placed upside down at the center of the chamber. The skeletons of two young women were arranged nearby in birthing and midwifing poses, and two crouching children’s skeletons were placed at a higher level. Among the many gold artifacts found in the tomb was a red-painted gold mask, which covered the face of the man’s detached skull. At the time, scientists identified the red pigment in the paint as cinnabar, but Luciana de Costa Carvalho, James McCullagh and colleagues wondered what the Sicán people had used in the paint mix as a binding material, which had kept the paint layer attached to the metal surface of the mask for 1,000 years.

To find out, the researchers analyzed a small sample of the mask’s red paint. Fourier transform-infrared spectroscopy revealed that the sample contained proteins, so the team conducted a proteomic analysis using tandem mass spectrometry. They identified six proteins from human blood in the red paint, including serum albumin and immunoglobulin G (a type of human serum antibody). Other proteins, such as ovalbumin, came from egg whites. Because the proteins were highly degraded, the researchers couldn’t identify the exact species of bird’s egg used to make the paint, but a likely candidate is the Muscovy duck. The identification of human blood proteins supports the hypothesis that the arrangement of the skeletons was related to a desired “rebirth” of the deceased Sicán leader, with the blood-containing paint that coated the man’s skeleton and face mask potentially symbolizing his “life force,” the researchers say.

The authors do not acknowledge any funding sources.

The abstract that accompanies this article is available here.

The American Chemical Society (ACS) is a nonprofit organization chartered by the U.S. Congress. ACS’ mission is to advance the broader chemistry enterprise and its practitioners for the benefit of Earth and all its people. The Society is a global leader in promoting excellence in science education and providing access to chemistry-related information and research through its multiple research solutions, peer-reviewed journals, scientific conferences, eBooks and weekly news periodical Chemical & Engineering News. ACS journals are among the most cited, most trusted and most read within the scientific literature; however, ACS itself does not conduct chemical research. As a leader in scientific information solutions, its CAS division partners with global innovators to accelerate breakthroughs by curating, connecting and analyzing the world’s scientific knowledge. ACS’ main offices are in Washington, D.C., and Columbus, Ohio.