Did ancient Siberians know about the Hippocratic teachings of Ancient Greece? 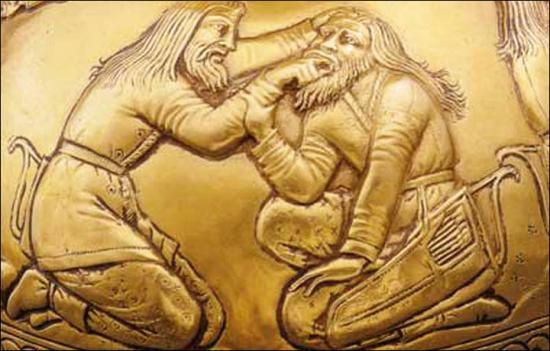 Neurosurgeons are working with anthropologists and archeologists to recreate the surgical techniques of our ancestors.

This follows the discovery of two ancient skulls showing clear evidence of recovery after trepanation some 2,300 to 2,500 years ago in the Altai Mountains.

One man, aged 40 to 45, had evidently suffered a trauma. The academics surmise he was hit, suffering damage to his left temporal and parietal bones. As a result, he developed a haematoma, which would have led to him suffering headaches, nausea, vomiting, disturbances to his consciousness, and movement problems in his right leg and hand.

The ancient doctor decided on a trepanation to remove the haematoma. Evidence of later bone growth seen in the skull suggests that the man not only survived the surgery but lived for years afterwards.

The second male skull had no visible trace of trauma but instead it is suspected he had a congenital deformation of the skull, which the surgeon wanted to ameliorate.

In both these cases, a relatively small hole was made in the skull in a place where safety was maximised, avoiding damage to the joints and the dura mater.

In the first case,  the Scythian surgeon made a hole more than one centimetre behind the cranial suture, at an appropriate distance from the edge of the sagittal sinus. 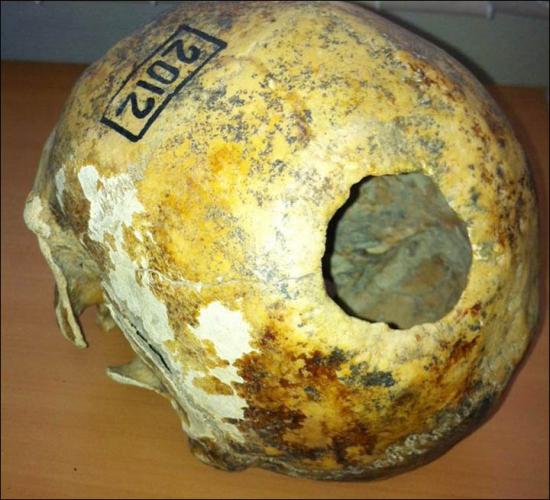 Two ancient skulls showing clear evidence of recovery after trepanation. Man scull from Kyzyl-Dzhar-V (top) and Man scull from Bike-III (bottom). Pictures: Institute of Archaeology and Ethnografy of the Siberian Branch of Russian Academy of Sciences

Interestingly, the scientists concluded that  the trepanation, made by Pazyryk surgeon in Siberia is in strict accordance with the recommendations of the Hippocratic Corpus, which is usually held to have been set down - some 5,000 kilometres away - at around the same period in Ancient Greece, say the Russian academics.

Anthropologist Tatyana Chikisheva said: 'It is still unclear: were these medical skills the result of a link between early nomads of Siberia with the medical centres of the ancient world? Or did the Pazyryks separately come to the same conclusions as prominent ancient doctors in Greece and the Middle East?'

The actual surgical technique, and the implements, may have varied from those recommended in Ancient Greece, yet the care for the patient, and placing of the trepanation hole, shows a similar ethical aim.

The academics' view the results of the ancient operations on these two skulls to be 'astonishing' given the risks associated with such surgery.

They point out: 'In the middle 19th century, the survival of patients after trepanation in the best hospitals in Europe rarely exceed 10%, which was associated with an extremely high risk of infectious complications, and this operation was committed only when patients had very severe traumatic brain injury.

'Even today, with advanced neurosurgical techniques, successful implementation of trepanation requires the serious knowledge and training, and the procedure itself is not considered as absolutely harmless.'

Not that it was always successful in ancient Siberia. Far from it.

A 30 year old woman's skull showed starkly different results. Her symptoms indicated damage consistent with a fall from a height. Her skull remains indicate that she died during the surgery or soon afterwards.

This surgery showed some mistakes, say the authors.

The choice of the place where the hole was made in the skull was inexplicably bad, just above the largest venous collector of the brain, carrying the risk of fatal bleeding. The surgeon's technique in this case was also 'crude'.

'Probably, in those ancient times, the human factor, the choice of doctor, was crucial,' they said, indicating that little has changed between then and now.

The people on whom the operations were conducted were regarded as 'ordinary' rather than elite members of their society, from the manner in which they were buried.

30 year old woman's skull from Kyzyk-Dzhar-IV shows that she died during the surgery or soon afterwards. Picture: Institute of Archaeology and Ethnografy of the Siberian Branch of Russian Academy of Sciences

In gathering data about the ancient surgery, the researchers now feel able to recreate the tools used by our forebears and seek to repeat their surgical techniques, albeit on skulls of the dead.

This pioneering work is being undertaken by Novosibirsk neurosurgeons Alexey Krivoshapkin and Vladislav Kurbatov, along with anthropologists Tatyana Chikisheva, quoted above who is Leading Researcher of the Institute of Archaeology and Ethnography, and Alisa Zubova, a Research Fellow at the same institute.

The institute is part of the Siberian Branch of the Russian Academy of Sciences.

It is hoped their results will be known early next year.

While it is established the trepanation was carried out much earlier from Mesolithic or early Neolithic era, this was not necessarily for treatment of diseases of the nervous system.

'It may have been related to the rituals through which man reached altered states of consciousness required for religious and magical activities,' they say.

'It is possible that changes in behaviour observed after cranial trauma were seen as manifestations of 'divine madness'.'