A colorful, well-preserved "mural tomb," where a military commander and his wife were likely buried nearly 1,500 years ago, has been uncovered in China.

The domed tomb's murals, whose original colors are largely preserved, was discovered in Shuozhou City, about 200 miles (330 kilometers) southwest of Beijing. Researchers estimate that the murals cover an area of about 860 square feet (80 square meters), almost the same area as a modern-day bowling lane.

Most of the grave's goods have been looted, and the bodies are gone, but the murals, drawn on plaster, are still there. In a passageway leading into the tomb, a door guard leans on his long sword watching warily. Across from him, also in the passageway, is a guard of honor, supported by men on horses, their red-and-blue uniforms still vivid despite the passing of so many centuries. 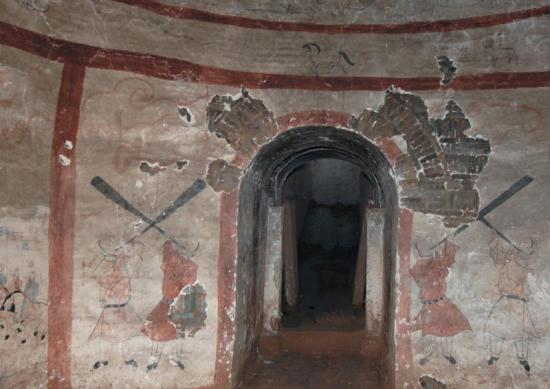 Four men blow into long horns at the entranceway into a 1,500-year-old tomb chamber, located on the south wall.

Inside the tomb itself, the man and woman who had been interned are depicted enjoying a banquet while sitting under a canopy. A man plays a tall harp while two other musicians hold windpipe instruments. At the tomb's entranceway, another mural shows four men blowing into long horns.

In addition to the commander's wife there are a number of females depicted in the tomb. Some of them are attendants and a few appear to be musicians (one of them carrying a windpipe instrument). The archaeologists note that all the females, including the wife, are depicted with their hair in the shape of a "flying bird." 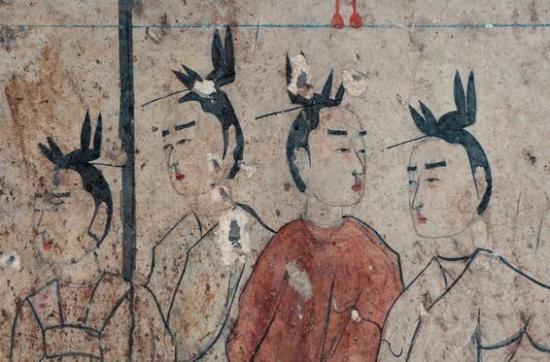 A close-up of four of the female attendants under a parasol. Notice the detail of their "flying bird" hairstyles.

Another scene features a tall red horse ready to be mounted. In another scene is a carriage pulled by a tan ox and driven by two men, each with black hair and curly beards (possibly foreigners).

And then there is the dome itself, which shows how the ancient Chinese viewed the heavens.

"The domed ceiling is painted uniformly in dark gray color to signify the infinite space of the sky. The Silver River (representing the Milky Way) flows across the sky from the southwest to the northeast, and inside the river are fine fish-scale patterns representing waves in the water," wrote archaeologist Liu Yan, who reported the discovery, in translated English, in the most recent edition of the journal Chinese Archaeology. A longer version of the article, written in Chinese, was published earlier in the journal Wenwu. 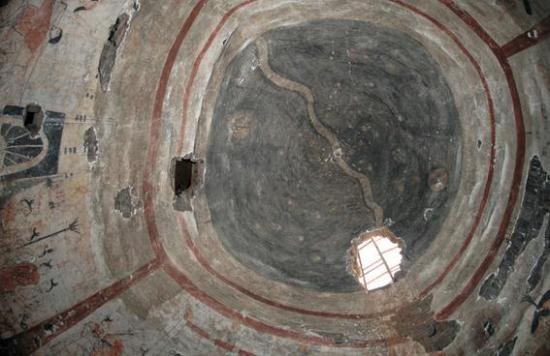 Yan notes that, on either side of this Silver River, white dots represent the stars, alongside representations of the moon and sun, with the sun bearing a "gold crow" at its center. Supernatural beings and zodiac animals are depicted below this sky map.

The tomb was uncovered in a salvage excavation in 2008. Yan said that the tomb had been robbed three times before he got to it, and most of the grave goods, including the bodies, were gone. In fact, the thieves were making preparations to steal the murals, too, but the authorities arrived just in time to stop the theft.

"Tomb robbers had already made preparations for removing the murals. The blue lines that were drawn to divide the murals into sections for cutting and the gauze fabric used for reinforcing the murals before detachment still remain on the surface of the walls," Yan wrote. [Maya Murals: Stunning Images of King]

When authorities discovered the tomb, a team of scholars from several Chinese antiquities institutions began excavating the site and conserving the murals. Based on these murals and the tomb design, along with a few remaining grave goods, the scientists determined the tomb dates back nearly 1,500 years, to the Northern Qi Dynasty.

Archaeologists believe the couple buried at the site consisted of a military commander, in charge of the Shuozhou City area, and his wife. This makes sense given the date of the tomb.

Historians know that at the time this couple lived, three rival dynasties battled for control of China. The buried commander served the Northern Qi, a short-lived dynasty that lasted between A.D. 550 and 577, when it was conquered by another group of rulers known as the "Northern Zhou."

Needless to say, military leaders were in high demand at this time, and military experience was the key to obtaining power.

"The Zhou and Qi states both exemplified military dynasticism," Stanford University professor Mark Edward Lewis wrote in his book "China Between Empires: The Northern and Southern Dynasties" (Harvard University Press, 2009). "Their rulers had risen through military service and based their powers on a central army," he writes.

In such an environment, it appears, a local military commander could afford a finely decorated tomb for the afterlife.