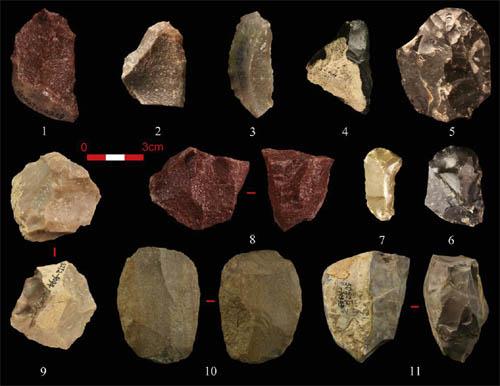 The blade technology is no longer accepted as a marker of modern humans, while the presence of different varieties of systematic blade production in transitional and Initial Upper Paleolithic industries remains a topic of considerable scientific interest. Dr. GAO Xing, Institute of Vertebrate Paleontology and Paleoanthropology (IVPP), Chinese Academy of Sciences, and his team re-examine the evidence for the age of the blade technology at the Shuidonggou site by comparing the lithic assemblages from the new excavations at Locality 2 with those from Locality 1, and found that the age of large blade technology appears to be around 34,000-38,000 years ago in this region, not around 24,000-29,000 years ago as thought before, suggesting a relatively rapid technology dispersal from the west and/or north. Researchers reported in the latest issue of the Journal of Human Evolution 64 (2).

The Shuidonggou Paleolithic site includes 12 localities, ranging in date from Early Late Paleolithic to Late Paleolithic, and is presently the most important site complex for the initial Late Paleolithic in northern China. It has yielded evidence of large blade production as well as the use of personal ornaments, and played an essential role in discussions of the spread of blade technology and other Upper Paleolithic traits across eastern Eurasia.

Based on the archaeological sequence and chronology at the Locality 2 in particular, researcher found that there were at least two chronologically successive technologies in the Shuidonggou region between 40,000 and 20,000 years ago. The earliest of these includes distinctive production of large blades from flat, Levallois-like cores as well as more prismatic forms. These features mark an intrusive technology spreading from north and/or west. It is succeeded by a series of 'small flake tool' assemblages characterized by generalized flake production and sidescraper-dominated toolkit.

"Results from recent excavations at Shuidonggou Locality 2 allows us to re-examine the relationship between Locality 1 and 2, using not only stratigraphy but also the technological features of the assemblages. The lithic industry of cultural layers 1 through 4 at Locality 2 is not based on large blades, so reported dates from these layers cannot be an indicator of the age of large blade technology. The findings including the most recent studies show that there is more technological diversity than previously described in the Shuidonggou sites, and the layers yielding evidence of large blade production are significantly older than the most widely accpted dates", said first author LI Feng of the IVPP.