Should we keep the Vikings’ stolen goods?

The National Museum of Denmark regularly receives objects that appear to be stolen goods from the Viking Age. Shouldn’t these objects be returned to their original owners? 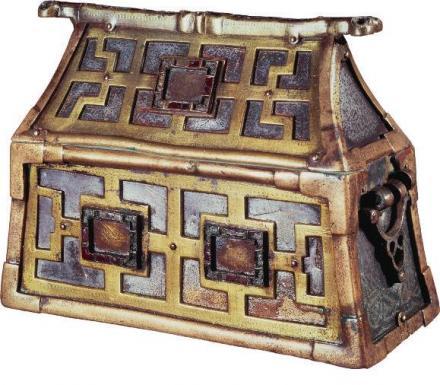 Made in Scotland or Ireland toward the end of the eighth century, the original purpose of Ranvaik’s chest had been to house the bones of a Christian saint. (Photo: National Museum of Denmark)

Ranvaik’s golden chest was made in Ireland or Scotland toward the end of the eighth century and originates from a church or a monastery.

"Ranvaik owns this shrine" the inscription on the bottom reads, as a strong indication that it later came to belong to a noble Viking lady named Ranvaik.

Archaeologists believe that the shrine, which can be admired at the Danish National Museum, is stolen property from the Viking Age.

”Viking Age objects that come from churches and monasteries can best be explained as loot from the raids which made the Vikings notorious in the Christian world,” explains Maria Panum Baastrup, an archaeologist at the National Museum’s Prehistoric Collection.

”We know that the original owners of these things associated them with holiness, so it’s unlikely that they could be described as commodities.”

The National Museum’s Prehistoric Collection receives its largest contribution from Danish amateur archaeologists and it’s currently enjoying a growth of ecclesiastical objects such as fragments of crosiers, sacred vessels and church silverware, which have been found in Danish soil.

Viking raids are well-documented in historical sources, and the fact that objects from other European churches and monasteries have ended up on Scandinavian soil shows that the Vikings did not return empty-handed from their raids.

One method of determining the origins of an object involves looking at the design and the materials and then making comparisons with similar objects from the same time period. This enables archaeologists to learn about the nature of the Vikings’ contact to the rest of the world.

“The Vikings were also traders and received gifts, for instance in connection with baptism,” says Baastrup.

“Every year we receive new objects from the Viking Age, and we get them from all over the country. Many of these we assume the Vikings got hold of legally.”

But what about those Viking Age objects that in all likelihood were stolen goods? Shouldn’t they be returned to their original owner?

“I think that would be unnatural. But having said that, there may be cases where doing so would still make sense,” says medieval archaeologist Peter Pentz, of the National Museum.

“The Vikings were not convicted for stealing, and the Danish nation wasn’t as it is today, neither geographically nor politically.”

The National Museum has no fixed rules for when objects should be returned. Ultimately it is a political matter whether the items should remain Danish cultural heritage or whether they belong in another country.

We can’t turn back the clock

It has been debated whether Denmark should reclaim the items that the Swedes were given as war reparations in 1600-century Denmark after the Swedish Wars.

“War reparations were widely accepted at the time, so I don’t think it would make sense for Denmark to reclaim those objects now,” says Pentz. He believes that history justifies the fact that historical objects aren’t always found in the location where they belong.

“My personal view is that we cannot turn back the clock and rewrite history. But of course, there may be cases where it makes sense, emotionally or politically, to hand back the items.”