The carved jasper stone, found in Israel, was apparently commissioned by a wealthy man and passed down for generations. The 'naked runner' gemstone found in Shikmona: Commissioned by a rich Roman who may have hoped it had magical properties.

A unique gemstone found in Israel that may have adorned a ring has shed light on a little known art in ancient Rome: fine carving.

On the floor of a room dating to the early Byzantium period, around 4th century CE, archaeologists spotted a red gemstone beautifully engraved with the figure of a naked running man holding a laurel wreath in one hand.

Or maybe he's holding a wreath of olive branches. It's hard to tell. In any case, in the other hand the bare gentleman holds what is clearly a date palm branch.

Based on his research, the engraving on the stone is unique in the annals of Israeli excavation, says Dr. Michael Eisenberg of Haifa University's Zinman Institute of Archaeology, director of the Shikmona Excavation Project.

Modern forensics in search of answers

Human remains at Tel Shikmona and the nearby town date from the Late Bronze to the Late Byzantine period, but the gemstone appears to date from the Roman era, indicating that it may have been handed down over generations.

Eisenberg for his part handed it over to Dr. Iris Groman-Yaroslavski, head of the Use-Wear Analysis Laboratory at the Zinman Institute of Archaeology for further study, using techniques one would associate more with police forensics than the study of ancient history.

Chemical analysis taught that the gem is jasper, a particularly hard stone commonly used in jewelry in the ancient world. The stone had been polished in a sophisticated, multi-stage process, she says, until its facets were smooth as glass and its dimensions apparently precisely suited to the mounting in a ring, or possibly a pendant. Closeup of the 'naked runner' jasper found in Shikmona: Little had been known about ancient Roman gem carving before it.Photo by Dr. Michael Eisenberg

Moving onto a scanning electron microscope, Groman-Yaroslavski found that the carving consisted of arching cuts and minute grooves made using a rotating device equipped with a tiny cutting-wheel.

The underside of the gemstone was encrusted with a powdery white substance. Chemical analysis proved the goo to be bone glue that had affixed the stone to the ring or pendant.

"As miniature engravings go, the proportions and accuracy of this one are perfect," Groman-Yaroslavski enthuses. "The artist who created it apparently sat at a table and operated a miniature cutting wheel to create the image on the stone. 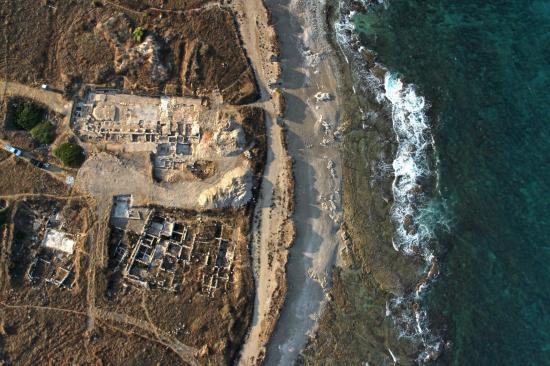 Tel Shikmona, where the 'naked runner' jasper gemstone was found in a 4th-century house. Photo by Dr. Michael Eisenberg

Given that jasper is hard, the ancient artisan must have used an even harder stone cutting wheel, which isn't easy to find in nature. "Apparently it was corundum, which is a crystalline form of aluminium oxide that can have traces of iron, titanium and chromium," she says.

Aside from bone glue, Groman-Yaroslavski also discerned traces of silver and lead on the gemstone, which may have come from the ring or pendant bearing the stone.

Jewelry of the type the gemstone probably ornamented was often used for ceremonial purposes, says Groman-Yaroslavski. Traces of glue were also found inside the arching grooves of the engraving, which are of differing depths, creating a three-dimensional image, she says.

"The grooves would typically be painted using a bone glue-based color diluted with some other substance, usually gold or silver, that turned the paint black. The signs of glue in the grooves support the notion that this gemstone had a ceremonial purpose," she says.

Commissioned by a wealthy man

Little is known of how gemstones were carved in ancient times, says Groman-Yaroslavski, the main and scanty source being Pliny the Elder, a Roman who studied nature back in the 1st century CE and wrote the famous tome "Natural History."

The stone therefore provides unique information about ancient Roman gem-working techniques. Also, since there is no evidence of gem-working in Israel during the first centuries CE, it probably originated in some far-flung part of the Roman Empire.

The stone had evidently been commissioned by a wealthy man, either as a personal marker or possibly to use as a seal that may have been thought to confer supernatural protection, says Eisenberg. Given the subject matter, the man who commissioned it may well have been an athlete.

And since the house the gemstone was found in dates to the 4th century CE, the archaeologists speculate that the stone had been passed down through the generations. It did not, however, seem to have conferred magical protection on the household.