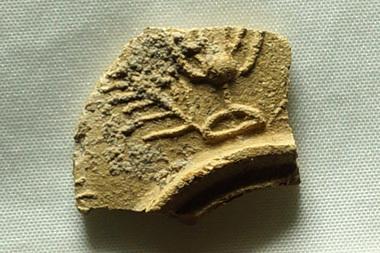 An archaeological expedition directed by Samford University religion professor James Riley Strange has uncovered the remains of a Jewish village in the Galilee sector of Israel.

Strange announced the discovery along with fellow directors Mordechai Aviam of the Institute for Galilean Archaeology at the Kinneret Academic College in Israel and David Fiensy of Kentucky Christian University.

The remains include an ancient synagogue, houses and massive evidence of pottery production in the ancient Jewish village of Shikhin, near the ancient Jewish city of Sepphoris (Zippori). The site is important because it teaches about Galilean Jewish village life and its economy at the birth of both Christianity and the Judaism of the Talmud, according to Dr. Strange. The sites are about five miles northwest of Nazareth.

“The site of the discovery has been abandoned, except for agriculture, ever since the mid-fourth century A.D.,” said Strange. “The buildings came down and people used its stones in other nearby buildings, then those buildings were destroyed and the stones were re-used again.”

He and his colleagues worked with a team of college students on the dig. Samford students Jonathan Sansom and Richard Shaw worked on the dig. Aaron Carr, a 2012 Samford graduate who has dug on teams led by Strange since 2009, is a staff member of the dig. Samford alumnus Kay Clements is a volunteer.

Strange has taught archaeology courses at Samford since 2007, and taken Samford students on archaeological expeditions to Galilee since 2009. He and the students have worked at the Shikhin site since 2011.

The excavators noted that the Jewish historian, Flavius Josephus, mentions Shikhin as one of the earliest Jewish settlements in the Galilee at the time of the Hasmonaean dynasty, which ruled in about 140-63 B.C.. The Talmud mentions it as a village of potters near Sepphoris.

The team was surprised by the large number of molds for making oil lamps (seven) found at the site, proof that the village potters produced various types of oil lamps in addition to many common pottery forms. One small fragment of an oil lamp is decorated with a Menorah and Lulav (palm branch).

The Excavations at Shikhin are part of a cultural heritage project to preserve the site of Shikhin, located at the northern edge of Zippori National Park.

“The remarkable discovery at Shikhin by Dr. James Strange and his collaborators is the fruit of many months of skilled and patient effort," said Samford provost and executive vice president J. Bradley Creed. "I am particularly grateful that under Dr. Strange’s tutelage, Samford students have been involved in the project which has been a once in a lifetime experience for them and an incredible learning opportunity. This international, cultural heritage project is a boon to the field of archaeology and historic preservation as well as a significant contribution to a richer understanding of human civilization and society.”

For more information on the Shikhin archaeological dig, go to http://www.samford.edu/shikhin/