The Cambridge-Yerevan Sister City Association (CYSCA) is launching a fundraising effort to help support the ongoing research into 4th–2ndmillennium B.C. history and culture at the Shengavit archaeological site in Yerevan. Archaeologist Dr. Mitchell S. Rothman, head of the department of anthropology at Widener University in Pennsylvania, plans on returning to Armenia with a group of American archaeologists and students this summer. 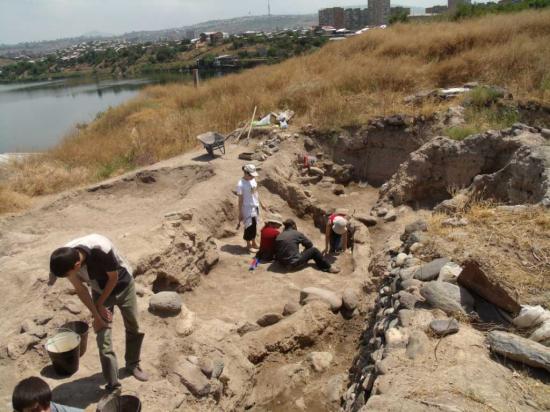 There, at the Shengavit Historical and Archaeological Culture Preserve in Yerevan’s Shengavit district, his team, with Armenian colleagues, will continue the work begun last summer. Namely, they will work to uncover the story of the ancient society that was present at the site from the 4thmillennium B.C. This was before the formation of Armenia and other nations in the region, although it is widely believed the society living there at the time must have played a part in the genesis of the Armenian people.

Excavations at Shengavit reveal at least 4 layers of civilization during a period extending up to 2,000 years. At the site are foundations for dwellings, some of them round, with hearths, pottery, remains of seeds, and animal bones, as well as tombs. A small museum displays some of the artifacts found at the site, with many more artifacts on display at Armenia’s State History Museum in the center of Yerevan. Urartian tombs from a later period were found not far from the Shengavit site in Yerevan.

The site was initially excavated in 1936 by Armenian archaeologists. This was the first site that exhibited what is often called “Shengavit culture” or “Kura-Arax” culture. This culture had contacts throughout much of the Middle East, as far as Mesopotamia and Palestine, and as far west as Malatia in western Armenia (Anatolia). But there are still many questions that archaeologists and historians seek to answer: The U.S. archaeologists want to establish a more precise chronology for the site using advanced dating techniques and to evaluate the evolution of Shengavit’s social structure. They then hope to publish a full history of Shengavit.

When asked about the significance of the Shengavit site, Rothman provided the following comments to CYSCA Board member Joseph Dagdigian:

“The site of Shengavit in the hills above the Ararat Plain is one set of remains of an ancient culture called variously Kura Araxes, Early Transcaucasian, Karaz, Pulur, Shengavitian, etc. Its full time period is still much under debate, but probably it starts somewhere around 3500 B.C. and ends 2500-2200 B.C. The homeland of this culture is in the southern Caucasus, the current countries of Georgia, Armenia, and Azerbaijan, along with a section of current northeastern Turkey from Erzurum through Kars provinces. To fully understand the importance of this culture, its place in its contemporary world is essential to comprehend. Its beginning is co-terminus with the establishment of the first states in southern Mesopotamia and the founding of the first international trading system, which covered an area from the Persian Gulf to the north Caucasus from modern western Iran to the Mediterranean Sea. In the north Caucasus this is the time of the earliest Maikop Cultures. Its end is near the time of the founding of the first territorial empire of the northern Mesopotamian Akkadians, and the dominance of mobile pastoralist societies known for theirkurgans (stone tombs) in Eurasia. This culture shared strong traditions, represented in part by unique black burnished, handmade pottery, often bearing incised or raised designs. First at about 3500 B.C., migrants bearing these markers of identity appeared in the Upper Euphrates River valley (Malatya), and after approximately 3000 B.C. spread across the Taurus and Zagros mountain fronts and down into the North Jordan Valley in modern Israel. The nature of the Kura Araxes societies are unique and different from either the Mesopotamian or Western Iranian ones to the south or the Maikop ones of the north.”

“Earlier scholars believed that these people were simple village farmers and herders. Recent research at Shengavit, particularly the work of the Armenian American team jointly directed by Drs. Hakob Simonyan of the ROA Ministry of Culture and Mitchell S. Rothman of Widener University, are suggesting that although they are not comparable to Mesopotamian cities, they were becoming more sophisticated, based in part on metal production. The work at Shengavit, of another Armenian American team (Drs. Ruben Badalyan of the Institute of Archaeology and Adam Smith of Cornell University) in the Aragats area, and of teams in neighboring countries is just beginning to unravel the changes in social structure and inter-regional relationships that occurred over the span of the Kura Araxes Period.”

The Shengavit site is in dire need of preservation for future generations of archaeologists, students, and curious visitors. The site is run by a dedicated staff of three individuals headed by Vladimir Tshagharyan, an experienced architect and archaeologist who has for many years worked on protecting and preserving Armenia’s archaeological and architectural heritage. The site, however, receives no operating expenses from the government even though the small museum building needs structural reinforcement, water and sewage connections, rest rooms, running water, a new roof to protect priceless artifacts in the museum building, and other necessary improvements to facilitate research by professional archeologists as well as visits by the general public.

CYSCA has undertaken a project to support the Shengavit Historical and Archaeological Preserve in partnership with Tshagharyan, who was a participant in CYSCA’s “Community Connections” program in Cambridge in 2003.

Those with access to Google Earth can get a satellite view of the Shengavit site by typing in Shengavit’s coordinates (40 09’24.99”N, 44 28’36.99”E). From the satellite one can see Yerevan Lake to the northwest and the large adjacent hospital; the small building is the Shengavit Museum. The foundations of the ancient settlement structures are also clearly visible.