Replica of the tomb dedicated to the god Osiris(MinProject: Archaeological Mission Canaria-Toscana)

A tomb complex has been discovered in the necropolis at the West Bank of Thebes, complete with multiple shafts and chambers, say archaeologists.

Inside the tomb, researchers discovered a carving of Osiris and a wall relief with an illustration of ademon holding knives.

According to EFE, the Spanish news agency, the tomb is a smaller version of the Osireion, constructed during the reign of pharaoh Seti I, in the city of Abydos, Luxor.

Osiris, god of the dead(Wikipedia)

The underground complex is made up of a large hall, supported by five pillars, with a staircase fromthe north wall of the main room, leading down to the funerary area. A carving of Osiris, deity of the dead, is in the middle of the central vaulted temple, according to RTVE.

A carving of Osiris, the Ancient Egyptian god of the dead, is in the middle of the central vaulted temple, according to RTVE.

The tomb was discovered in the Valley of the Nobles, an area that houses over 15 excavated tombs of ancient Egyptian high officials and dignitaries, Abdel-Hakim Karar, director of the Upper Egypt Antiquities Department told The Cairo Post.

"The tomb was found inside the unfinished tomb of 'Kampp -327'. It is centred on a statue of Osiris who is depicted sitting in a chapel facing a staircase with a 9-metre deep shaft connecting to another room with another 6-metre deep shaft," said Karar. 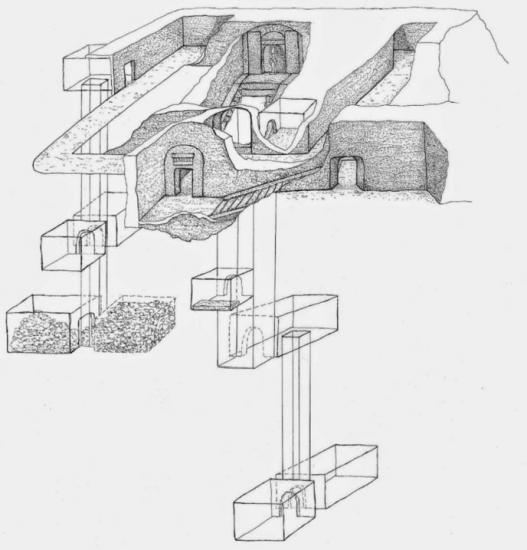 Sketch showing the outline of the tomb of Osiris(MinProject: Archaeological Mission Canaria-Toscana)

In ancient Egyptian mythology, "Osiris, God of the afterlife, was murdered by his brother Seth, who was the God of disorder and chaos. Seth shut Osiris in a sarcophagus and threw it in the Nile River before the body was discovered by Seth's sister and Osiris' wife, Isis, the Egyptian goddess of magic," explained former head of the Supreme Council of Antiquities Abdel Halem Nour el-Din.

Isis collected all the pieces and bandaged the body together. But the only body part Isis could not locate was the phallus, as it had been eaten by catfish. Isis created a golden phallus and briefly brought Osiris back to life with a spell, during this time, she became pregnant by Osiris before he returned to death.

Isis later gave birth to Horus, who became seen as a representation of new beginnings and the destroyer of the evil Seth. 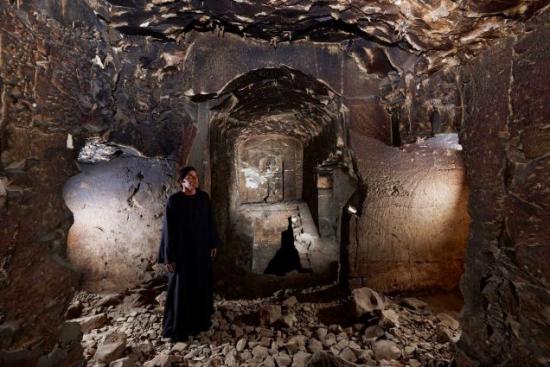 The main chamber. You can see the statue of Osiris at the back, with the stairs and central shaft going down. 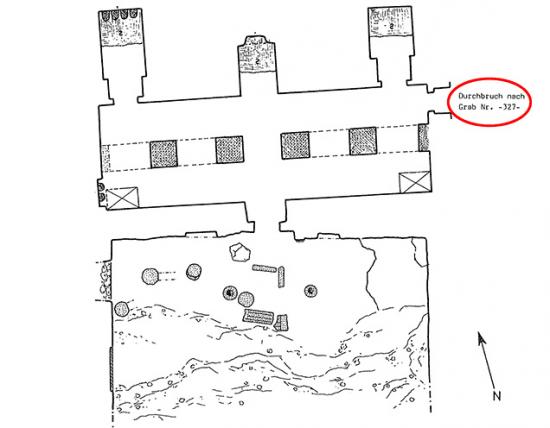 The tomb was initially catalogued by Philippe Virey in 1887. Later in the 20th century there were some attempts to draw a plan of the main structure. Tomb Kampp -327- however (marked in red in the plan below) was never described and published. Álvarez told EFE that her team will start revealing the chambers during the next archeological campaign, in the fall of 2015.