SHEFFIELD TOWNSHIP, Ohio -- The earliest known residents of Lorain County left no historical records of who they were and how they lived. 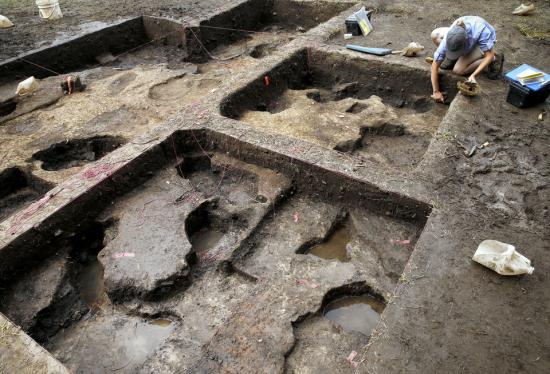 They left only fragments of evidence, buried by time, that yield their secrets only to patient exploration and trained eyes.

Patience, hard work and study paid off this summer for Dr. Brian Redmond, curator of archaeology at the Cleveland Museum of Natural History, and his team of dedicated diggers. 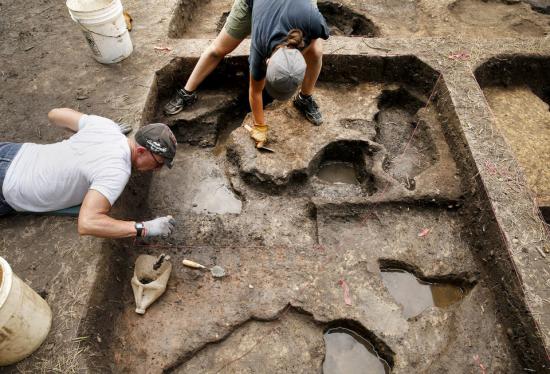 Action program, that has discovered the use of clay floors by Native Americans dating back 4,000 years ago. Artifacts found include remains of deer, small game animals, hunting tools and burned hickory nut shells.

In a clearing that once was farmland and now is part of the Lorain County Metroparks, they uncovered the floor of a dwelling built 4,000 years ago.

"There's nothing like this anywhere in Ohio. It's very significant, a much more significant site than we previously thought," Redmond said. "These are house structures. This was like a village site."

The builders lived in what archaeologists classify as the Late Archaic period in North America, so far back that they don't have a tribal name.

"We have no idea what they called themselves or what language they spoke," Redmond said. "The only reason we know anything about them is archaeology."

The excavation in the Metroparks, he said, delivers "direct evidence of what they did and how they lived."

Redmond prefers to keep the specific location of the dig confidential, because of the potential for vandalism and illegal digging. Farmers plowed up arrowheads and other artifacts on the land over the years, and smaller digs explored the site as far back as 1971.

Systematic test holes over several acres led to the current dig, in square grids ranging from a depth of about 10 inches to almost three feet. 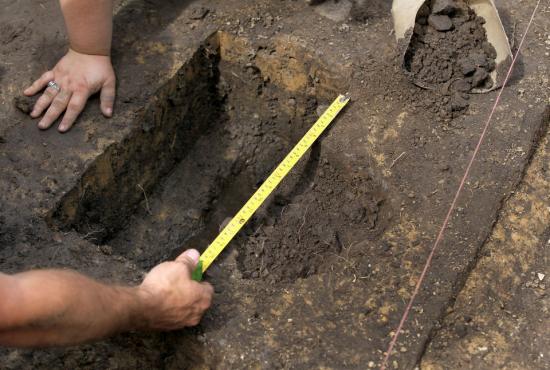 The uncovered floor, which is about 3 inches thick, is built of layers of yellow clay that was carried from nearby areas. An unmistakable basin is built into it, as are cooking pits and storage holes that held hickory nuts, which were an important source of nutrition.

Dark spots in the clay around the edges of the floor are the remains of organic material. They are "post molds" from the post holes that would have anchored hickory saplings. The saplings would have been tied together, wigwam-style, in a framework for the prehistoric house. Layers of cattail mats would have covered the framing.

"A small family would be very comfortable. They were well insulated, and sheltered under the tree canopy of oaks," Redmond said. "Unlike at other sites, they're going to the trouble to make floors. They're here for months at a time."

They were not people indigenous to Northeast Ohio, he said, but migrants from the southeast, most similar to tribes found in northwest Kentucky and southern Illinois. Every few years, if not annually, for 200 or 300 years, their travels would bring them to the site in Lorain County to spend the fall and winter.

They were hunters and gatherers who lived before the advent of pottery or farming, and 2,000 years before moundbuilding.

They ate fish from the nearby Black River and Lake Erie, small game such as squirrels and muskrat, and they specialized in deer. "We find a lot of butchered deer bones," Redmond said. 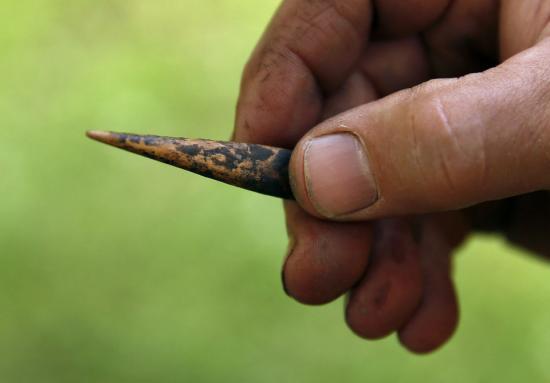 Awl made of deer bone

He and Brian Scanlan, supervisor of archaeology field programs at the Natural History Museum, lead the "Archaeology in Action" digging crews, whose members have ranged in age from 18 to beyond 80.

Paying for the privilege of learning and using excavation techniques, they include college students earning credits or experience and museum members who use their vacation time to dig into the past.

"These folks really want to be out here and learn," Redmond said. "They do a great job."

He's been doing summer field work since coming to the museum more than 21 years ago. It's something he started at Indiana University, where he earned his doctorate. 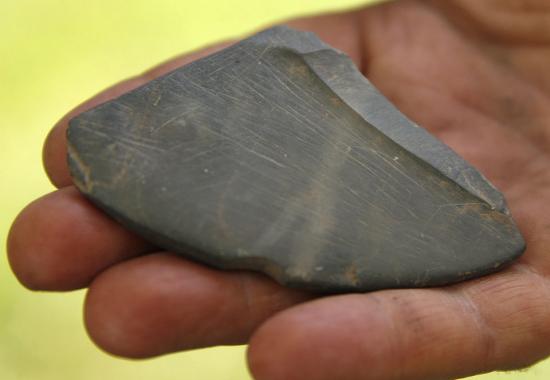 Bannerstone made of slate that could be used as a weight on a spear thrower
This summer's crew also included two archaeologists from Libya's official department of antiquities. Under sponsorship of Oberlin College, they're learning excavation and documentation best practices from Redmond.

"It's a little different for them here," he said with a nod to the pools and puddles in and around the excavation. "They've never worked in the rain." They have, however, worked with sites dating back 100,000 years.

Redmond recently published research about one of the oldest sites in Ohio -- an artifact-rich in Medina County whose inhabitants were among the first to colonize the lower Great Lakes at the close of the Ice Age. It dates back about 13,000 years.

Artifacts from that site, the Lorain County dig and other excavations will be featured with video documentation at the Museum of Natural History in its recently launched $150 million expansion and renovation.

The exhibits will demonstrate "we're not just studying books. we go out and do the science. we do the field work," Redmond said.

Work at the Lorain County site will continue this year on weekends as weather allows. When the season ends, Redmond said, the archaeologists will probably preserve it by covering it with plastic and filling the dig with dirt: