Archaeologists are unearthing answers to one of the Arab region’s biggest historical mysteries – the origin of the domesticated dromedary.

According to 3,000-year-old evidence discovered at two excavation sites in Sharjah, people in what is now the UAE were probably the first to domesticate the wild camel.

A team from Bryn Mawr College in Philadelphia has been digging at the sites in Tell Abraq and Muweilah along the border with Umm Al Qaiwain since early December. 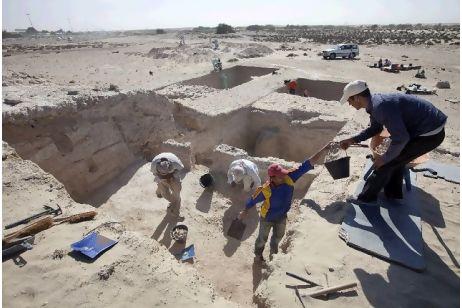 The excavations have revealed almost 10 times as many bones of domesticated dromedaries as at any other single site in the Middle East.

The sites have been known to archaeologists since the 1970s, when they were first excavated by teams from Australia and Denmark.

Among them was a young archaeology doctoral student, Peter Magee, who came to the region because he was fascinated by the Middle East’s history.

Now he has returned to explore the sites again, “because there were unanswered questions here that I wanted to resolve”.

According to Mr Magee, the history of the domesticated dromedary is key to understanding the expansion of human settlements at that time, around 1000BC, when the camel was vital to a flourishing local population as a prime source of meat and milk.

More important, it was used to transport goods across the harsh desert landscape, which helped to facilitate development.

Periods of drying and drought in the Middle East often caused societies to collapse, Mr Magee says, but not in the UAE.

“When there were periods of desiccation in this area, it actually seemed to cause expansion, which is a very interesting pattern quite different from the rest of the region,” he said.

The excavation sites show evidence that this expansion could be due to the domestication of camels, and the emergence of innovations such as irrigation systems.

“The Tell Abraq site is important because it contains multiple layers that show many periods of occupation. This provides us with an opportunity to see the development of the economy and the environment at that time.”

According to Mr Magee, the earliest levels of the site go back to 2500BC, during the Bronze Age, the period that was focused upon in the earlier excavations.

“The period from about 2000BC to about 500BC is still poorly known in this region, so I was quite sure that we could find deposits dated to that period on this side of the mound.”

The past few weeks of digging have proved his hunch was right. 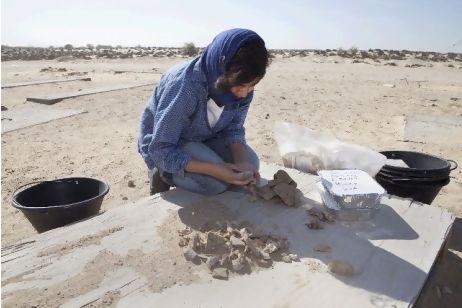 The 15-member team, which includes Steve Karacic, a PhD candidate from Bryn Mawr, unearthed a deep, 4.5-metre-wide stone wall from around 1000BC – the same period in which large human settlements in the region increased.

“It’s very exciting to find this,” said Mr Karacic, who is digging in the UAE for the second year in a row. “We’ve found a lot of floors in these trenches, so being out here has been a lot of fun.”

According to Mr Magee, it would be “easy to think” that the wall could have been a fortification, “but 3,000 years ago the most sophisticated weapons were metal and bronze bows and arrows. They wouldn’t have needed a wall to protect against that.”

It was more likely, he said, to be a “statement of ownership”.

“If you were walking towards the site from the south east, you would have seen this massive stone wall rising up, so it would have been a monumental statement in the landscape.”

There is still no evidence showing the name of the native tribe at the time, nor what language they spoke. However, the sites have changed the common understanding of trading patterns in the region.

“We’ve found evidence that we traded with the rest of Arabia during this time, and that was not really possible until the camel was domesticated.”

Last week the team unearthed painted figurines of camels with saddles on them, which Mr Magee said attests to the theory of the changes in trading patterns.

They have also found thousands of ceramic shards, stone vessels, sea shells, bronze items, animal bones and an inscription written in an extinct language from Yemen.

Three American undergraduate students from the Philadelphia college are in charge of sifting through the never-ending piles of dirt.

Akshyeta Suryanarayan, 20, picked up a flat-looking rock and asked Mr Magee if it was a piece of pottery.

“No, that looks like a turtle shell,” he said.

“We’ve found a lot of interesting things, and it’s cool to learn how it works out here on an excavation site,” said Sara, while prodding a few pieces of 3,000-year-old bird bone.

“Our discoveries will mean that some of the early ideas about the transition into this more intense period of occupation around 1000 BC clearly need to be rewritten – some of which I wrote 15 years ago,” Mr Magee said.

“We need to think about the fact that new evidence changes opinions, including our own, and that is exiting.