Remains of the Husky-like dog, buried 7,000 years ago in Siberia, suggest people saw it as a thinking, social being. 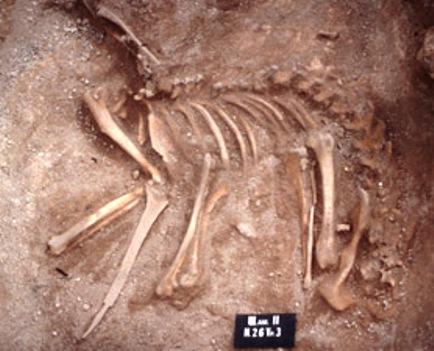 Burial remains of a dog that lived over 7,000 years ago in Siberia suggest the male Husky-like animal probably lived and died similar to how humans did at that time and place, eating the same food, sustaining work injuries, and getting a human-like burial.

"Based on how northern indigenous people understand animals in historic times, I think the people burying this particular dog saw it as a thinking, social being, perhaps on par with humans in many ways," said Robert Losey, lead author of a study about the dog burial, which has been accepted for publication in the Journal of Anthropological Archaeology.

"I think the act of treating it as a human upon its death indicates that people knew it had a soul, and that the mortuary rites it received were meant to ensure that this soul was properly cared for," added Losey, an associate professor of anthropology at the University of Alberta.

"Just like the humans in the cemetery, the dog was buried with other items, (such as) a long spoon made of antler," Losey said.

The dog was carefully laid to rest lying on his right side in a grave pit that, at other levels, also contained five partial human skeletons.

DNA and stable isotope analysis determined the animal was indeed a dog and that he ate exactly what humans at the site consumed: fish, freshwater seal meat, deer, small mammals, and some plant foods.

The canine's life, as well as that of the people, wasn't easy, though.

"The dog's skeleton, particularly its vertebrate spines, suggests that it was repeatedly used to transport loads," Losey explained. "This could have included carrying gear on its back that was used in daily activities like hunting, fishing, and gathering plant foods and firewood. The dog also could have been used to transport gear for the purposes of relocating settlements on a seasonal basis."

Additional fractures suggest the dog suffered numerous blows during its lifetime, possibly from the feet of red deer during hunting outings. The researchers cannot rule out that humans hit the dog, but its older age at burial, food provisions, and more suggest otherwise.

From the same general time period, the scientists also found a wolf burial at a site called Lokomotiv near the Irkut and Angara rivers in Siberia.

The wolf, which did not consume human-provided foods, appears to have died of old age. Its remains were found wrapped around a human skull. There is no evidence the wolf interacted with the person when alive.

Susan Crockford, adjunct professor of anthropology at the University of Victoria and author of the book "A Practical Guide to In Situ Dog Remains for the Field Archaeologist" (2009), told Discovery News that she was "surprised to see the description of the wolf/human internment," she added. "That is definitely unusual."

Crockford isn't supporting any particular interpretation of the burials just yet, however, since she said, "There can be many reasons for the ritual treatment of dogs, including ones we might never imagine."