A new study on the populations of wild cattle and boars in the Levant Valley by Nimrod Marom, Guy Bar-OzLaboratory of Archaeozoology, University of Haifa, Israel has been published inPLOSone online Journal. The research helps reshape our present understanding on the beginning of agriculture and domestication of animals.

The faunal assemblage from the 9th-8th millennium BP site at Sha’ar Hagolan, was used to study human interaction with wild suids (pigs) and cattle in a time period just before the appearance of domesticated animals of these species in the Jordan Valley. 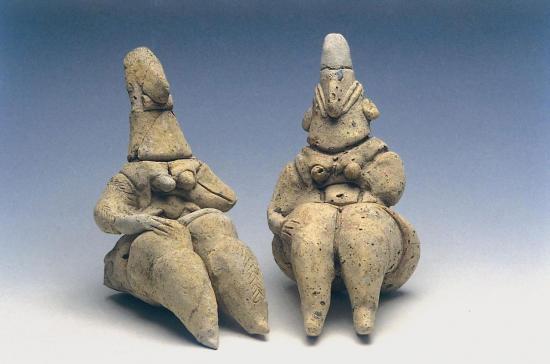 The early Neolithic village was occupied ca. 8000-7500 years during what is known in the region as the Yarmukian Culture. The site is already famous for the remarkable assemblages of figurines with one of the structures yielding approximately 70 made of stone or fired clay. It is also one of the first sites in the area that pottery is found.

No other single site of this period has produced so many figurines in a single building, and among the outstanding art objects from Sha’ar HaGolan are figurines in human form made of fired clay (above) or stylistic carved pebbles.

At the centre of the village stood a large, well-constructed building, serving what may be assumed to be a communal function. It has a courtyard reached from the narrow, winding alley which runs between the domestic structures of the settlement. Several rectangular rooms with thick mudbrick walls and one circular room, which served as a silo, were built around the courtyard.

The results, based on demographic and osteometric data, indicate that full domestication of both cattle and suids occurred at the site during the 8th millennium. Importantly, domestication was preceded in both cow and suids demographics indicating severe overhunting.

The possible role of overhunting in shaping the characteristics of domesticated animals and the social infrastructure to ownership of herds is seen as plausible.

The most common marker used to document domestication are demographic, bio-geographic and morphological changes that occur in the transformation of a wild species into a domesticated one.

The onset of this process can be found in sheep, goat, cattle and pigs in certain parts of the Near East from the 12thmillennium BP onwards.

Age-at-death and sex ratio analyses of early livestock show increasing departure from the prime-adult pattern that typified Palaeolithic and Epipalaeolithic hunting to a selective culling of younger male animals which suggests domesticated herds.

DNA extraction from Neolithic zooarchaeological specimens in the region has so far been unsuccessful and so the researchers limited the inquiry to morphometric and demographic data which are to date the most commonly used methods for documenting the transition from hunting to controlled selection (the first step to full domestication).

Body-size in cattle and suids was recorded as significantly smaller than that of the reference specimens from local wild populations during the earliest phase of settlement at the site, in the PPN (Pre Pottery Neolithic)

By documenting the sex, age at death and general body mass, it becomes clearer that the access to wild animals is decreasing and more pressure is placed on smaller, younger and mainly male animals.

These demographic markers can be directly linked to an evolving human-animal relationship and show perhaps a foundation of domestication in a growing need, based on overhunting.