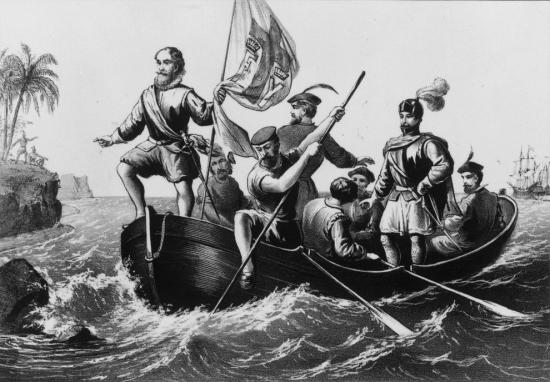 In this illustration, Christopher Columbus and his crew land at the island that he named San Salvador, in the modern-day Bahamas. PHOTOGRAPH BY MPI, GETTY

Severe scurvy struck Columbus's crew during his second voyage and after its end, forensic archaeologists suggest, likely leading to the collapse of the first European town established in the New World.

In 1492, Christopher Columbus crossed the Atlantic, beginning Europe's discovery of the New World. Two years later on his second voyage, he and 1,500 colonists founded La Isabela, located in the modern-day Dominican Republic.

The first permanent European town in the Western Hemisphere, La Isabela was abandoned within four years amid sickness and deprivation.

Historians have long blamed diseases such as smallpox, influenza, and malaria for the town's demise. But a study of graveyard remains from the town site, reported online in the International Journal of Osteoarchaeology, suggests that an ancient seafarer's scourge—scurvy, a severe vitamin C deficiency—plagued Columbus's first colony and worsened the illnesses behind their town's collapse.

"There were lots of diseases, fevers, epidemics, we know from their writing. It seems no one was spared," says study author Vera Tiesler, an archaeologist at Mexico's Universidad Autonoma de Yucatán. "But apparently scurvy played a big role."

Since the 1980s, archaeologists have been unearthing the bones of La Isabela's inhabitants from graves behind the abandoned village's small churchyard, and storing them at the Museo del Hombre Dominicano in Santo Domingo, Dominican Republic.

The skeletons are of sailors and colonists from La Isabela who were buried in the Catholic tradition, laid on their backs with their arms crossed. "They were still encased in earth when we started the study. We had to clean the bones to proceed," Tiesler says. (One of Tiesler's co-authors, her husband and colleague Andrea Cucina, is a National Geographic Society grantee, on a separate but related project.)

Tuberculosis, syphilis, and other diseases that historians believe struck La Isabela would leave their mark on skeletal remains. Tiesler and colleagues examined 27 of the skeletons, all but one belonging to men. At least 20 bore signs—striations carved in the outer lining of bones—of what the study called "severe scurvy." The telltale marks were found on weight-bearing bones on both sides of the body, evidence against severe bone infection, which would strike in one location.

The study "shows convincingly that the crew members of Columbus who were buried at La Isabela had suffered, but also had healed, from scurvy before they died," says scurvy expert George J. R. Maat of Leiden University Medical Center, the Netherlands.

Scurvy remained the scourge of seafarers until the 18th century. British sailors famously were nicknamed "limeys" for the lime juice they drank as a preventive for the severe vitamin C deficiency, which produces symptoms including lethargy, anemia, and, in severe cases, the re-opening of old wounds. The ailment typically appears after one to three months of complete vitamin deficiency.

The study suggests that the colonists, weakened by a two-month voyage and the one-month wait at sea that preceded it, probably already suffered from scurvy when they arrived in 1494.

In the New World, however, the colonists would have been surrounded by fresh fruits and vegetables rich in vitamin C. So how did they end up with severe scurvy?

"The implication, to me, is that the Spaniards had cut themselves off almost completely from their new environment by alienating the native people around them," says Charles Mann, author of 1493: Uncovering the New World Columbus Created.

"The Caribbean is full of foods that are packed with vitamin C," Mann says. Fruits such as guava and wild cherries, and the native staples of cassava (yucca) and sweet potato, all contain enough vitamin C to forestall scurvy.

"Packed behind their stockade in La Isabela, they seem to have sampled next to nothing of the rich menu of the Caribbean," Mann says. "It was a lethal mistake."

The finding might explain why Columbus implored the Spanish crown to send more shipments of food to the early colonists. But none of the foodstuffs requested were rich in vitamin C, and ultimately the colonists faced rationing.

"One problem was that Christopher Columbus himself was more concerned with looking for gold than feeding his people," Tiesler says. "In their letters they all want to go home."

The organization of La Isabela, the tools, and its pottery all point to Spanish colonists pursuing a European lifestyle there. "This probably also applied to their dietary preferences," says the study.

"They also faced constant attacks" by the native people, Tiesler says. Later weakened by European epidemics, the native Taino people of the island probably couldn't have helped the colonists, she adds, even if they had wanted to.

Tiesler acknowledges that her initial report of the scurvy findings, at a 2010 bioarchaeology meeting, met with strong skepticism from some archaeologists, who did not see evidence of scurvy in the colonists' own accounts from the time. "Diagnosis from old letters is very difficult," Tiesler says. "We argue [that] the historical evidence and what we see on the bones support the argument for very bad cases of scurvy."

Some of the bones do show some signs of healing, likely as a result of the colonists eating limited amounts of some foods containing vitamin C, says Maat. A. E. van der Merwe, Maat's Leiden University colleague and fellow scurvy expert, concurs. Some vitamin C must have been present in the diets of some of the dead, she says, because they had been healed of scurvy when other diseases killed them.