Earliest evidence for magic mushroom use in Europe

Europeans  may have used magic mushrooms to liven up religious rituals 6000 years ago. So suggests a cave mural in Spain, which may depict fungi with hallucinogenic properties - the oldest evidence of their use in Europe.

The Selva Pascuala mural, in a cave near the town of Villar del Humo, is dominated by a bull. But it is a row of 13 small mushroom-like objects that interests Brian Akers at Pasco-Hernando Community College in New Port Richey, Florida, and Gaston Guzman at the Ecological Institute of Xalapa in Mexico. They believe that the objects are the fungi Psilocybe hispanica, a local species with hallucinogenic properties. 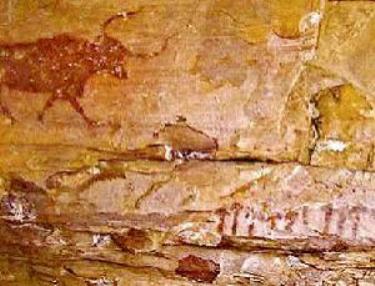 This isn't the oldest prehistoric painting thought to depict magic mushrooms, though. An Algerian mural that may show the species Psilocybe mairei is 7000 to 9000 years old.