Chaco Canyon was home to the first centralized civilization north of Mexico.

For the Anasazi inhabitants, Pueblo Bonito was the center of their universe. 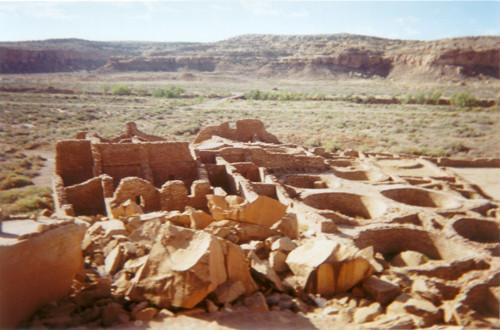 The advanced and enduring stonework of Pueblo Bonito in Chaco Canyon, New Mexico.

The mysteries of Chaco Canyon and its outlier communities are many: arrow-straight roads extending for miles  out into the desert; freestanding residential buildings several stories tall; structures and petroglyphs depicting the solstices and other astronomical alignments; and a capital city with a population rivaling the great cities of Europe at the same time. But the greatest mystery of all is: What happened to these sophisticated urban dwellers that they would completely abandon their magnificent cities?

Called the “American Cradle of Civilization,” Chaco Canyon represents the most important concentration of archaeological remains in the United States. The 12-mile (19-km) long and one-mile (1.6- km) wide canyon was a thriving urban center 900 years ago, and home to approximately 4,000 to 6,000 people. The stone-built towns in Chaco Canyon were individual complexes known as “Great Houses.”

The ancient people that inhabited Chaco Canyon are commonly known as the Anasazi — a refined people who designed intricate irrigation systems, outstanding earthenware pots and a city laid out in the manner of modern apartment blocks. The largest of 11 Great Houses in Chaco Canyon is called Pueblo Bonito, a complex that contained both dwellings and ceremonial centers. There are also 400 smaller ruins among the 2,000 total sites recorded in the canyon.

A nomadic people first settled in the canyon around 100 CE and began planting maize and other crops. A thousand years saw this ingenious people go from hunters and gatherers to sophisticated urban dwellers. Chaco’s most active building period began around 1020 CE and continued at a rapid pace for several decades. By 1110, this power was manifested at several of the outlying communities where a Chacoan Great House would preside over smaller farming domains. For hundreds of years Chaco influence dominated northwestern New Mexico, and beyond. The Anasazi most certainly had trade and spiritual contacts with their Toltec/Maya cousins to the south. Chaco inhabitants were known to keep macaw parrots imported from Central America.

Look to the skies

Evidence of archaeoastronomy at Chaco has been discovered with the “Sun Dagger” image. This spiral petroglyph near the top of Fajada Butte in Chaco Canyon is carved behind three upright slabs of rock, which cast a different interplay of light to denote calendar markings for the equinoxes and solstices. The petroglyph on Fajada Butte, as well as the orientation of certain architectural features, was likely produced to serve as a seasonal calendar.

Large seasonal ceremonies would have attracted hundreds of “pilgrims” to the canyon along a ritually used road system that connected Chaco to distant communities, and to the sacred landscape. Oral traditions relate stories of clans migrating from Chaco to the surrounding Four Corners area.

Ten Hopi clans trace their ancestry to Chaco. As a result, modern Pueblo Native Americans share a strong physical and spiritual connection to Chaco, and revere the canyon and all its ruins as extremely sacred. Modern Southwest Indians believe that the spirits of their ancestors still inhabit Chaco Canyon, and thus it is a location to be deeply honored and respected.

In its 12th century heyday, Chaco Canyon was the administrative, political, spiritual and ceremonial center of the Anasazi people and nation. Scattered across Chaco Canyon and especially in the Great Houses were several round kivas, a Hopi term for ceremonial chambers.

The scale of the Chaco kiva ceremonies was immense; 400 people could attend each of the 15 great kivas, while 100 smaller kivas could accommodate 50-100 others. The largest kiva in the Southwest, the Casa Rinconada, incorporated a special window for viewing the summer solstice on June 21st and included a series of antechambers, two stairways, wall crypts, and a sub-floor passageway.

Kivas were an architectural holdover from Basketmaker pit houses and were usually entered by a hole in the roof that served also as an escape for hearth smoke. Climbing down the smoke-hole ladder was part of the purification ritual for participants in a kiva ceremony. Almost all kivas featured a small hole in the floor behind the hearth, called a sipapu, which acted as a symbolic entrance to the underworld from which the Anasazi believed they once emerged. Other common kiva features are wall niches used for keeping ceremonial objects, foot drums, and wall benches. The tradition of holding ceremonies in a large round room passed on to the Pueblo Indians, most notably the Hopi, Ute and Zuni tribes. Many clans still trace a direct relationship with Chaco, including the Athapaskan speaking Navajo who are not even Pueblo Indians.

The largest Chaco Canyon Great House is a D-shaped  complex called Pueblo Bonito. The name means “pretty village” in Spanish, but like all the ruins in the valley, the original Anasazi names are unknown. From Pueblo Bonito, trails and stairways crisscross Chaco Canyon to a dozen other major ruins in the canyon. Designed for communal domestic life, its other functions probably included religion andceremony, storage, hospitality, trading, signaling, celestial observation and burying of the dead. The complex had more than 600 rooms, numerous two- and three-story buildings, several kiva complexes, and supported a year-round population between 100 and 400 persons.

Some of the alignments that can be made from the structure of Pueblo Bonito itself are impressive. For example, there are two intersecting walls dividing the pueblo, exactly aligned to north, south, east, and west. The east-west wall divides the seasons at the fall and spring equinoxes. Elaborate lunar and solar alignments are featured in the construction of other Chaco Canyon pueblos, including many that integrate high noon solar alignments. But what happened to this advanced culture? From tree-ring dating, it is known that a period of severe drought came upon the Four Corners region in 1250 CE, causing the abandonment of Chaco Canyon. Rediscovered in 1849 by U.S. Army soldiers on military reconnaissance, the site was severely vandalized for seventy years until it was made a national monument in 1907.