A newly discovered document, written by one of Europe's most famous philosophers, Thomas Hobbes, reveals a plan that, if successful, could have turned the tide of one of England's bloodiest wars. 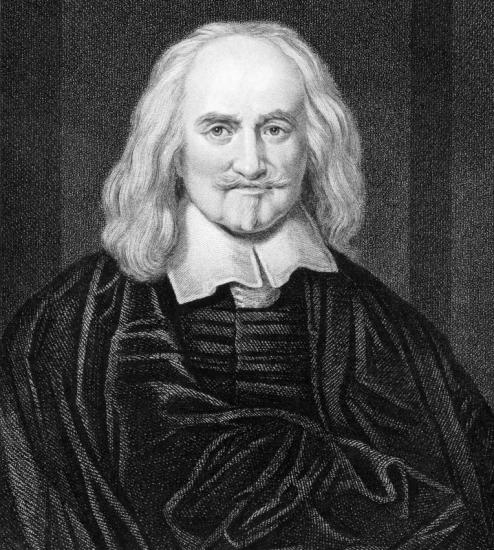 Thomas Hobbes was one of Europe's most famous philosophers; now a new document discovered in a collection of papers in the British Library reveals that he put together a plan to win the English Civil War for the king. CREDIT: Georgios Kollidas | Shutterstock

In the words of Hobbes, the plan would prevent the "ruine of the English nation." The document was written during the height of the English civil war, a series of conflicts between 1642 and 1651 that saw King Charles I (and later his son Charles II), pitted against his country's parliament.

Hobbes, whose work encompassed politics, history, law, physics and mathematics, was a strong supporter of the king. And in the newfound document, discovered among papers of English writer John Evelyn in the British Library, Hobbes proposes a plan to win the war by getting the head of the parliamentary navy, Earl of Warwick Robert Rich, to defect.

Hobbes had sent his document to Evelyn's father-in-law, Richard Browne,  who acted effectively as the king's ambassador to France. The handwriting is identical to Hobbes',and the document itself is marked "Proposition. E. of Warwick &ct. T. H."

"We don't have any other document of this kind from Hobbes' pen," Noel Malcolm, a senior research fellow at All Souls College, University of Oxford, told LiveScience in an interview. Malcolm explained that Hobbes' political writing tended to be fairly abstract. "Here, you see him get his fingers dirty in real-life politics."

The document, and Malcolm's analysis of it, are published in the most recent issue of The Historical Journal.

In 1643, supporters of King Charles I, called royalists, were in a good position, controlling a large amount of territory outside London. However, at the end of the year, the Scots intervened on the side of Parliament, crossing the border in January 1644 to help them out. Hobbes' proposal appears to have been written around this time. In it, he fears the Scots will bring Sweden, at the time a great military power, in to aid the Parliamentarians.

"It is not likely the Scots will depend on ye will of the [Parliament] for the benefit they [aim] at in this inuasion; and consequently there is no doubt but that they expect support from abroade," Hobbes writes, going on to provide reasons why the Swedes will likely come to Scotland's aid.

Regardless of whether the Swedes poised a risk to England, the fact that a Scottish army had crossed the border was enough to turn the tide of war in favor of Parliament. "That really played a huge part in shifting the balance of power in favor of the parliamentarian forces," Malcolm said.

Hobbes hoped to persuade Rich, the Earl of Warwick, to defect to the royalists, bringing much of Parliament's navy with him.

Malcolm said that the Earl was a strong parliamentary supporter and the chances of him coming over to the king's side were slim to none. However, if it did happen, it could have had a major impact on the course of the war.

"This man could have just brought probably most of the navy with him,” Malcolm said, explaining that in the 17th century soldiers and sailors tended to identify more with their leader than with a specific cause.

To win over Rich, Hobbes recommended restoring the Earl of Warwick's wealth, granting "pardons or other graces for his [friends] and kindred," the means to "allure and reward his officers soldiers and mariners" and a grand title of some sort that isn't specified.

It's ironic that in his political writings Hobbes condemned this kind of bribery. However, Malcolm points out that this was a unique situation. While Hobbes would condemn this activity in a "stable state," England was at war. "He thinks that almost any means would be justified to achieve the end of ending the war and putting the king back on the throne," Malcolm said.

Why Hobbes thought the Earl could be won over is a mystery; the Earl's record had been one of strong support of Parliament. Malcolm suggests that Hobbes may have arrived at his belief based on personal experience he had when both he and the Earl of Warwick were members of the Virginia Company. They were also both members of the Somers Islands Company, which was in charge of Bermuda.

At the time Hobbes wrote the proposal, it appears to have gone nowhere. So far, Malcolm has found no evidence that the Earl was approached at the time or that Browne even forwarded the proposal to royalist strategists in England.

"He was expecting it to be passed on, it was meant to go in some way or other to the king," Malcolm said.

Several years later, in August 1648, an attempt was made to get the Earl of Warwick to switch sides. At this point his brother, the Earl of Holland, had joined the royalists (the king's side).

At the time, the King's son, Prince Charles, faced off against the Earl of Warwick on the Thames Estuary. The prince's fleet was smaller and an attempt was made to bring Warwick over.

The prince is said to have issued a summons to Warwick imploring him to come under the king's ruling, helping to bring peace to "his majesty's dominions," according to "Memorials of the Professional Life and Times of Sir William Penn," published in 1833.

Warwick refused. Not even the defection of his brother to the royalist side could make the Earl of Warwick turn against Parliament's cause. "It was hopeless," Malcolm said.