Research says unique structure is the product of skilled construction 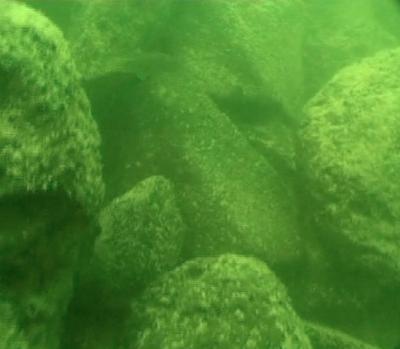 Basalt boulders that were found as part of a mysterious monument beneath the Sea of Galilee. Credit: Shmulik Marco / American Friends of Tel Aviv University (AFTAU)

The shores of the Sea of Galilee, located in the North of Israel, are home to a number of significant archaeological sites. Now researchers from Tel Aviv University have found an ancient structure deep beneath the waves as well.

Initial findings indicate that the structure was built on dry land approximately 6,000 years ago, and later submerged under the water. Prof. Marco calls it an impressive feat, noting that the stones, which comprise the structure, were probably brought from more than a mile away and arranged according to a specific construction plan.

Dr. Yitzhak Paz of the Antiquities Authority and Ben-Gurion University says that the site, which was recently detailed in the International Journal of Nautical Archaeology, resembles early burial sites in Europe and was likely built in the early Bronze Age. He believes that there may be a connection to the nearby ancient city of Beit Yerah, the largest and most fortified city in the area.

The team of researchers initially set out to uncover the origins of alluvium pebbles found in this area of the Sea of Galilee, which they believe were deposited by the ancient Yavniel Creek, a precursor to the Jordan River south of the Sea of Galilee. While using sonar technology to survey the bottom of the lake, they observed a massive pile of stones in the midst of the otherwise smooth basin.

Curious about the unusual blip on their sonar, Prof. Marco went diving to learn more. A closer look revealed that the pile was not a random accumulation of stones, but a purposefully-built structure composed of three-foot-long volcanic stones called basalt. Because the closest deposit of the stone is more than a mile away, he believes that they were brought to the site specifically for this structure.

To estimate the age of the structure, researchers turned to the accumulation of sand around its base. Due to a natural build-up of sand throughout the years, the base is now six to ten feet below the bottom of the Sea of Galilee. Taking into account the height of the sand and the rate of accumulation, researchers deduced that the monument is several thousand years old.

Next, the researchers plan to organize a specialized underwater excavations team to learn more about the origins of the structure, including an investigation of the surface the structure was built on. A hunt for artefacts will help to more accurately date the monument and give clues as to its purpose and builders. And while it is sure to interest archaeologists, Prof. Marco says that the findings could also illuminate the geological history of the region.

"The base of the structure—which was once on dry land—is lower than any water level that we know of in the ancient Sea of Galilee. But this doesn't necessarily mean that water levels have been steadily rising," he says. Because the Sea of Galilee is a tectonically active region, the bottom of the lake, and therefore the structure, may have shifted over time. Further investigation is planned to increase the understanding of past tectonic movements, the accumulation of sediment, and the changing water levels throughout history.