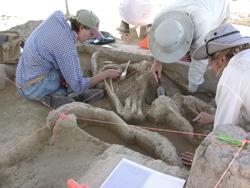 Researchers at the University of Kansas have been digging for clues that would tie the remains of a 15,500-year-old mammoth discovered in west-central Kansas with prehistoric human artifacts found nearby.

The bones and a knapping pile—stone flakes accumulated from tool-making activities —were unearthed in 2011 by heavy equipment terracing a field northeast of Scott City. Found about 50 yards apart, the bones and flakes were in the same shallow layer of sediment.

"It was intriguing to find a knapping pile and mammoth bones close together in the same geologic layer," said Rolfe Mandel, geoarchaeologist at the Kansas Geological Survey and professor in the KU anthropology department. "If we can determine that the people who created the flakes also killed the mammoth, it will prove that humans were in the Central Plains much earlier than currently proven."

The earliest known association between people and mammoths in the Central Plains occurred 13,000 years ago. That time period was verified at a Clovis-age site excavated by Mandel and others near Kanorado on the Colorado border.

Although radiocarbon dating shows that the adult mammoth at the Scott County site lived 15,500 years ago, the adjacent stone flakes are impossible to date. Therefore, direct evidence, such as artifacts among the animal's remains or butcher marks on the bones, is needed to prove that pre-Clovis people were in the area at the same time as the mammoth.

"The question is whether the stone flakes that were exposed during terracing were really from the same elevation as the mammoth bones or were deposited in a pit dug years after the mammoth died at the location," Mandel said. "If the tractor removed the top of a pit, the flakes would be more recent than the mammoth." 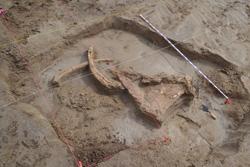 The KU team has excavated at the site since the summer of 2011, including a three-week stretch this year that wrapped up in early July 2013. The excavation process has been made more difficult and time-consuming because the mammoth skeleton was disarticulated and scattered—likely by wolves or other scavengers.

So far, about 25 bones have been excavated and removed from the site, including a large scapula and a nearly complete tusk. Ground-penetrating radar has been used to help detect the buried bones.

"We've recovered about 7 percent of the animal and are still looking for the head and teeth, which will tell us a lot more about it," Mandel said.

Mammoths stood up to 13-feet-high at the shoulder, weighed up to 10 tons and had long, curved tusks. In the same animal order as the elephant and the smaller, also extinct, mastodon, mammoths died out in the Central Plains about 12,500 years ago.

Single mammoth bones are often found in Kansas gravel pits, but a concentration of remains from an individual mammoth is not common. Mammoth remains associated with human artifacts and activities are rare.

Excavation will continue next summer and subsequent summers until evidence that dates humans to the time of the mammoth is found or all avenues have been exhausted, Mandel said.

The landowners have agreed to keep the mammoth locality out of cultivation until the excavation is complete.

Located on a small hill, the mammoth site is in a semi-arid treeless setting.

Over 15,000 years ago, the area was spruce parkland with tall grass and widely spaced spruce trees, some ponderosa pine and possibly aspen, Mandel said. The climate was cooler and wetter than today.

Mandel is principal investigator of the excavation and director of KU's Odyssey Archaeological Research Fund, an endowed program with a directive to search for the earliest evidence of humans in the Great Plains. Other KU researchers involved in the excavation include Jack Hofman, professor of anthropology, and Kale Bruner, doctoral student in anthropology.