The genetic science that is making advances in future medicine is starting to unravel some of the deepest secrets of Irish people’s past. 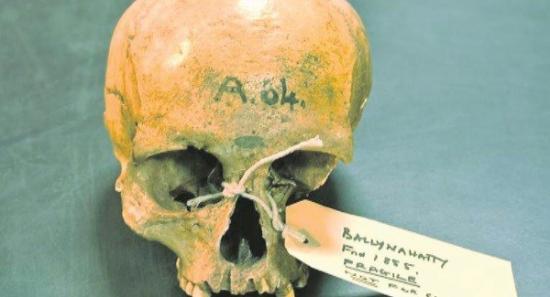 The research by scientists at Trinity College Dublin and archaeologists at Queen’s University Belfast reveals much about early Irish farming and its origins.

The presence of genetic traits indicating high lactose tolerance in three Bronze Age men buried on Rathlin Island around 4,000 years ago, for example, can tell a lot. This is a trait far more common in Ireland than elsewhere in the modern world.

“Lactose tolerance suggests that we have a long history of strongly relying on milk as a major food source, rather than simply meat from livestock,” said Dan Bradley, professor of population genetics at Trinity College Dublin.

While it is established that farming began in Ireland around 5,800 years ago, the traits of a woman and her genetic code, or genome, offer new clues to its origins. From the archaeology around her burial south of Belfast, where she was first excavated in 1855, it was already established that she was a farmer.

But the analysis of her DNA produced a genome — a code made up of 3bn parts that makes every human unique — which tells us a lot more about her.

“The genome sequencing process has been mainly for medical purposes, but we have piggy-backed the technology [which] medical people have developed,” said Prof Bradley.

The Belfast farmer woman lived 5,200 years ago — hundreds of years after farming began in Ireland — and her genome shows she had dark hair and brown eyes. This allowed the creation of a model of what she looked like. The genome revealed other genetic traits that show her ancestry was from the Middle East, where agriculture was invented.

The genomes of three Bronze Age men excavated more recently on Rathlin Island — but still more than 4,000 years old — show that one third of their ancestry was from ancient sources in the Pontic Steppe, a region near the Black Sea and modern Ukraine and Russia.

“There was a great wave of genome change that swept into Europe from above the Black Sea into Bronze Age Europe and we now know it washed all the way to the shores of its most westerly island,” said Prof Bradley.

“This degree of genetic change invites the possibility of other associated changes, perhaps even the introduction of language ancestral to western Celtic tongues,” he said.

While migration and its influence on Irish civilisation and culture have been controversial subjects in archaeology, the findings published in the journal Proceedings of the National Academy of Sciences, USA, show unequivocal evidence for massive migration.

They also support the argument that agriculture and farming were brought here by migrants, rather than being adopted by local people independently of any influxes of new people.

The discovery of genetic traits in the genomes of the Bronze Age men for haemochromatosis, a disease involving high retention of iron in the blood, is also significant — and not just as the first identification of an important disease in variant pre-history. Irish people have the world’s highest levels of this genetic variant and, combined with other traits still found in modern Irish genetics, this adds significant knowledge on the origins of today’s Irish gene-pool.

“Genetic affinity is strong-est between the Bronze Age genomes and modern Irish, Scottish, and Welsh, suggesting establishment of central attributes of the insular Celtic genome some 4,000 years ago,” said Lara Cassidy, a PhD genetics researcher at Trinity College Dublin.