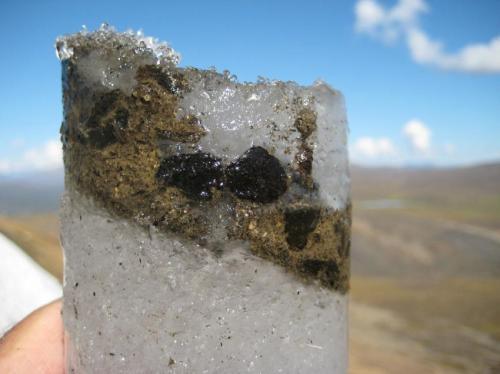 Eric Delwart of the Blood Systems Research Institute in San Francisco and colleagues have found two 700-year-old viral sequences in frozen caribou dung in an arctic ice patch. The researchers isolated part of a viral RNA genome and the complete genome of a DNA virus. They infected living plants with the DNA virus. The study appears in the Proceedings of the National Academy of Sciences.

Scientists don't know much about how viruses evolve. Understanding the structure of ancient viruses would increase knowledge of virus evolution. However, scientists have sequenced only a small number of ancient viruses. Reconstructing ancient viruses is difficult because they change very rapidly, making it hard to see how new sequences are related to one another. In addition, the nucleic acid content of ancient viruses can degrade quickly.

In a quest to find well preserved ancient viruses, Delwart and his team analyzed layers of caribou feces in a 4,000-year-old ice patch in Canada's Selwyn Mountains. When examining nucleic acids in frozen fecal pellets extracted from a 700-year-old ice layer, they identified two sets of well preserved viral sequences.

One of these was part of the genome of an RNA virus, which the researchers identified as belonging to the insect-infecting genus Cripavirus. They think caribou may have ingested insects infected with the virus. Insects attracted to the caribou or the feces may also have deposited the virus on the feces and the surrounding snow.

Delwart's team was able to reconstruct the entire genome of a DNA virus from the other viral sequence. This virus did not closely resemble any modern sequenced virus. However, the team discovered distant relationships with a group of plant-infecting viruses called geminiviruses and with gemycircularviruses, found in dragonflies, fungi and animal feces. 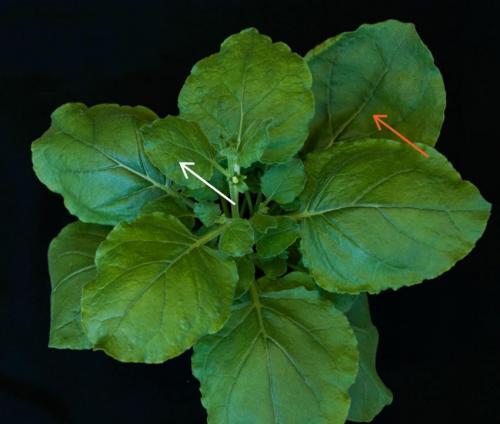 Upon the discovery of a viral DNA and RNA in ancient caribou feces, researchers reconstituted the viral DNA genome to test whether it might infect plants. Nicotiana benthamiana plants inoculated with the ancient viral DNA displayed evidence of infection including replication of viral DNA in inoculated leaves (orange arrow) and newly emerging leaves (white arrow). Credit: Li-Fang Chen

To learn more about the DNA virus, the researchers introduced it to the plant Nicotiana benthamiana, which scientists often use as a model when studying the infectivity of cloned geminiviruses. The virus replicated itself in inoculated as well as newly emerging leaves, evidence of infection. However, the infected plants did not develop any disease symptoms. The researchers suggest this could be because Nicotiana benthamiana is not the ideal host for this virus.

Delwart's team believes that caribou ingested the DNA virus when eating plants. Earlier studies have shown that viruses can remain infectious after passing through the digestive tracts of animals that have eaten virus-infected plants, insects or animals.

The researchers believe that as climate change speeds up the melting of arctic ice, more viral particles, which might remain infectious, could escape into the environment.

Subarctic ice patch in the Selwyn Mountains in the Northwest Territories of Canada. Alpine ice patches are unique repositories of archaeological artifacts and biological specimens that accumulate in ice layers deposited over thousands of years. Credit: Thomas D. Andrews

Abstract
Viruses preserved in ancient materials provide snapshots of past viral diversity and a means to trace viral evolution through time. Here, we use a metagenomics approach to identify filterable and nuclease-resistant nucleic acids preserved in 700-y-old caribou feces frozen in a permanent ice patch. We were able to recover and characterize two viruses in replicated experiments performed in two different laboratories: a small circular DNA viral genome (ancient caribou feces associated virus, or aCFV) and a partial RNA viral genome (Ancient Northwest Territories cripavirus, or aNCV). Phylogenetic analysis identifies aCFV as distantly related to the plant-infecting geminiviruses and the fungi-infecting Sclerotinia sclerotiorum hypovirulence-associated DNA virus 1 and aNCV as within the insect-infecting Cripavirus genus. We hypothesize that these viruses originate from plant material ingested by caribou or from flying insects and that their preservation can be attributed to protection within viral capsids maintained at cold temperatures. To investigate the tropism of aCFV, we used the geminiviral reverse genetic system and introduced a multimeric clone into the laboratory model plant Nicotiana benthamiana. Evidence for infectivity came from the detection of viral DNA in newly emerged leaves and the precise excision of the viral genome from the multimeric clones in inoculated leaves. Our findings indicate that viral genomes may in some circumstances be protected from degradation for centuries.