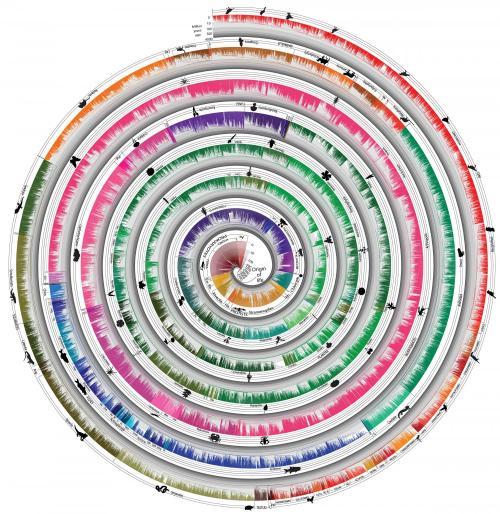 The tree of life compiled by Temple University researchers is depicted in a new way -- a cosmologically inspired galaxy of life view -- and contains more than 50,000 species in a tapestry spiraling out from the origin of life. Credit: Temple University
Temple University researchers have assembled the largest and most accurate tree of life calibrated to time, and surprisingly, it reveals that life has been expanding at a constant rate.
The constant rate of diversification that we have found indicates that the ecological niches of life are not being filled up and saturated," said Temple professor S. Blair Hedges, a member of the research team's study, published in the early online edition of the journal Molecular Biology and Evolution. "This is contrary to the popular alternative model which predicts a slowing down of diversification as niches fill up with species."

The tree of life compiled by the Temple team is depicted in a new way —- a cosmologically-inspired galaxy of life view —- and contains more than 50,000 species in a tapestry spiraling out from the origin of life.

For the massive meta-study effort, researchers painstakingly assembled data from 2,274 molecular studies, with 96 percent published in the last decade. They built new computer algorithms and tools to synthesize this largest collection of evolutionary peer-reviewed species diversity timelines published to date to produce this Time Tree of Life.

The study also challenges the conventional view of adaptation being the principal force driving species diversification, but rather, underscores the importance of random genetic events and geographic isolation in speciation, taking about 2 million years on average for a new species to emerge onto the scene.

"This finding shows that speciation is more clock-like than people have thought," said Hedges. "Taken together, this indicates that speciation and diversification are separate processes from adaptation, responding more to isolation and time. Adaptation is definitely occurring, so this does not disagree with Darwinism. But it goes against the popular idea that adaptation drives speciation, and against the related concept of punctuated equilibrium which associates adaptive change with speciation."

Besides the new evolutionary insights gained in this study, their Timetree of Life will provide opportunities for researchers to make other discoveries across disciplines, wherever an evolutionary perspective is needed, including, for example, studies of disease and medicine, and the effect of climate change on future species diversity.

These new results add to the decade-long efforts of the Timetree of Life initiative (TTOL), which includes internet tools and a book, led by team members Hedges and Sudhir Kumar. "The ultimate goal of the TTOL is to chart the timescale of life—to discover when each species and all their ancestors originated, all the way back to the origin of life some four billion years ago," said Hedges.

As an ongoing service to the scientific community, Hedges and Kumar plan to continue adding new data to TTOL from future peer-reviewed studies. They also will improve their current tools, such as web and smartphone apps, and develop new tools, that will make it easier to access the information and to explore the TTOL, and for scientists to update the growing tree with their new data.