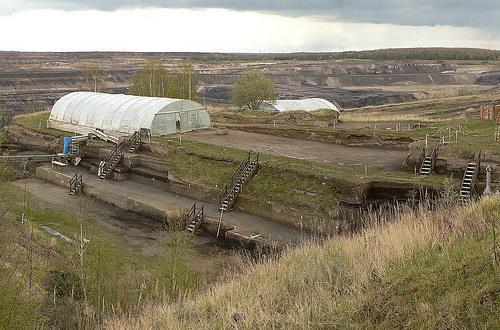 The Paleolithic site of Schöningen in north-central Germany is best known for the earliest known, completely preserved wooden spears (at least 10 recovered) by archaeologists under the direction of Dr. Hartmut Thieme between 1994 and 1998 at an open-cast lignite mine. Deposited in organic sediments on an ancient lakeshore, they were found in combination with the remains of about 16,000 animal bones, including 20 to 25 butchered wild horses, whose bones featured numerous butchery marks, including one pelvis that still had a spear protruding from it. The finds are considered evidence that early humans were active hunters with specialized tool kits as early as 300,000 or more years ago.

Now, a series of detailed study reports on the Schöningen findings have been published online in the Journal of Human Evolution. Altogether, they present a picture of groups of prehistoric hunters who sojourned at sites in the Schöningen area about 300,000+ years ago and hunted and processed mammalian species such as wild horse and red deer using tools/weapons made of wood, stone and bone. The findings have changed the long-accepted paradigm of a more primitive early human hunting culture during this time period that featured primarily stone tools and weapons and a somewhat more limited subsistence strategy.

One study describes an extraordinary assemblage of no less than 88 bone tools, consisting of modified mammal bones from various parts of the skeletons and testifying to the earliest known use of multi-purpose bone tools in the archaeological record. The authors note that it suggests a more advanced planning depth among early humans of this time period than traditionally thought.

On the other hand, another study dismisses the notion that the Schöningen humans had regular control of fire as part of their repertoire of skills. Upon examining purported hearths and burned wood and heated flints using multi-analytical and micro-contextual methods, the study authors concluded that there was no convincing evidence for the human control or use of fire. This challenges previous scholarly suggestions for evidence at Schöningen for the control of fire in Northern Europe during the late Lower Paleolithic.

Although no archaic human remains have been found at Schöningen, many scholars suggest that the ancient hunters were either members of the Homo heidelbergensis species or early Neanderthals. The findings at Schöningen are thought to have revolutionized the thinking on the cultural and social capacities of these early humans.

The series of studies are currently accessible in the Journal of Human Evolution.