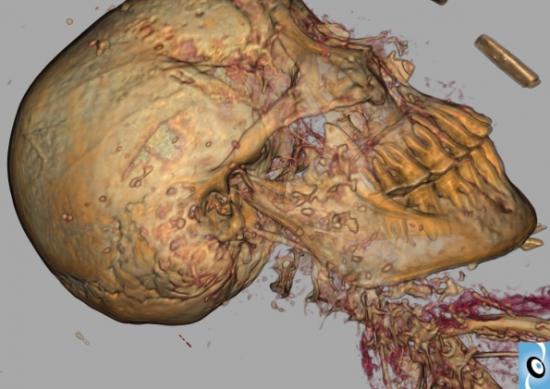 A metal plate in the shape of a scarab, probably gold, was found in the skull of the 2,000-year-old Rhind Mummyof Thebes, which has been in the National Museum of Scotlands collections since 1857. Below: the CT scan shows the treasures beneath the bandages. Images created with Fovias High Definition Volume Rendering� Software. www.fovia.com

She was spirited to Scotland by a forward-thinking Egyptologist who made an unusual decision not to unwrap the mummified remains of a young woman to find any “treasure” lying beneath.

Now, more than 150 years later, the secrets of what is under the black-tarred linen surrounding the “Rhind Mummy” has been revealed in a series of CT scans.

An Edinburgh University team of radiologists and forensic pathologists have identified the remains as those of a 2,000-year-old Egyptian woman, aged 25-29, with a plate of metal, probably solid gold, in the shape of a flying scarab, placed on her skull.

Another metal disc has also been found on her stomach, and she is clutching a rolled scroll in her right hand against her thigh. The scroll is likely to be a funerary text, combining directions for mummification with guidance for the afterlife, and it could give the mummy’s lineage or name.

Why she died remains a mystery despite the sophisticated scanning techniques normally used to diagnose disease in live patients. The experts believe she is likely to have expired following a common infection, such as then untreatable pneumonia, rather than TB, or syphilis, which would typically have showed up in the bone structure. 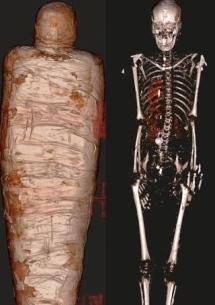 There is no sign either of injury from broken bones, though the scan does reveal the holes cut in the small bones at the back of her nose by Egyptian embalmers to remove her brain.

Even her teeth appear to be in remarkably good condition, although there are some signs of disease, suggesting she may have suffered from toothache. Jim Tate, head of conservation and analytical research at the National Museum of Scotland (NMS), said: “Apart from being dead, she was in good health.”

The mummy was brought back to Scotland in 1857 by Alexander Rhind, a 24-year-old Scottish Egyptologist, who discovered it in a tomb in the ancient city of Thebes, now known as Luxor. Meticulous about cataloguing only what he saw, he was critical of so-called “archaeologists” whom he claimed indulged in little more than looting by unwrapping mummies as it destroyed the carefully preserved corpses. His find was shipped back to Scotland undisturbed and has been in the museum’s collections ever since.

Relatively late in historical terms – from about 10BC – the mummy was “a handsome specimen of the style of ornamenting externally, by means of inlaid or impressed emblems of gold and coloured vitreous composition”, Rhind wrote. But he left the contents untouched.

Tate said: “It was very common to acquire and unwrap your mummy. To bring this back complete was quite advanced.” Earlier tests revealed the fabric wrapped round the mummy is not coated in bitumen, or tar, but in a mix of beeswax and pistachio resin. The surface has a series of symbolic amulets that Rhind is likely to have observed – such as a winged scarabs – a protective symbol – and a vulture with spread wings.

But the new research has revealed the concealed ornamentation that has lain unseen for more than two millennia. Some of the surface amulets have hidden – and perhaps more valuable – “twins” below the wrappings.

The work was carried out at the university’s Clinical Research Imaging Centre. With staff working after hours – so as not to disturb living patients – the mummy was passed through one of its £1.5 million scanners, taking full body images in 0.5 mm slices through the remains.

“Normally, we deal with live people,” said Professor Edwin van Beek, chair of radiology at the university, who typically deals with cancer patients or people with heart and lung disease. “The mummy is completely wrapped, so nobody had looked inside. When we imaged the mummy we found artefacts that nobody had ever seen before.”

Dr Elena Kranioti, a forensic anthropologist at the university, confirmed the mummy’s height and sex.

CT scans of animal mummies in Edinburgh’s collection have also been carried out, revealing the contents without unwrapping them. They have also thrown up surprises, including that a mummified baboon – at least according to the symbol on its bandages – is not a baboon at all. Inside is a collection of what appear to be bird bones, including a beak.

The species may be the remains of an ibis, a sacred bird. Thoth, the Egyptian god of wisdom, had both a baboon and an ibis as his sacred animals. But a mummified crocodile, the scans confirm, is indeed a fine example of the animal. Many species were killed and mummified by the ancient Egyptians as sacrifices to the gods.

The discoveries will be on show when the NMS opens its first major international exhibition – Fascinating Mummies – next month following its £47 million overhaul. A “fly-through” video of the scanners’ finds will be part of the experience. The exhibition combines exhibits from one of the world’s leading ancient Egyptian collections, from Leiden in the Netherlands, with artefacts from some of the 14 mummies or partial mummies’ in the NMS’s own collection.

Fascinating Mummies will examine the rituals of death and afterlife in Egypt, and the concept of preserving the bodies of those who were “dying only to be born again”. The Leiden exhibits include the mummy of Ankhhor, a priest serving in the temple of the god Montu in Thebes.