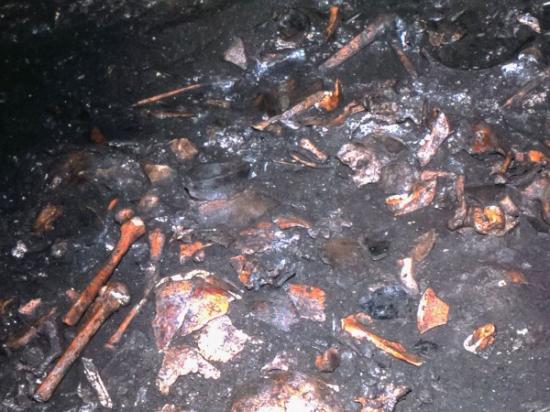 Defleshed and disarticulated bones found during excavations of Scaloria Cave's upper chamber in the late 1970s.

About 7000 years ago in Italy, early farmers practiced an unusual burial ritual known as “defleshing.” When people died, villagers stripped their bones bare, pulled them apart, and mingled them with animal remains in a nearby cave. The practice was meant to separate the dead from the living, researchers say, writing in the latest issue of the journalAntiquity.

“[Defleshing] is something which occurs in burial rites around the world but hasn't been known for prehistoric Europe yet," says John Robb, an archaeologist at the University of Cambridge in the United Kingdom and leader of the research project. Robb and his team examined the scattered bones of at least 22 Neolithic humans—many children—who died between 7200 and 7500 years ago. Their remains were buried in Scaloria Cave, a stalactite-filled grotto in the Tavoliere region of southeastern Italy, where Robb says that they provide the "first well-documented case for early farmers in Europe of people trying to actively deflesh the dead."

The cave—sealed off until its discovery in 1931—was uniquely able to preserve the human remains, which were mixed randomly with animal bones, broken pottery, and stone tools. This level of preservation is unusual: "Neolithic assemblages are often very challenging to interpret, as they are commonly broken, mixed up, and poorly preserved," says Martin Smith, a biological anthropologist at Bournemouth University in the United Kingdom, who was not involved in the research.

Neolithic communities typically buried their dead beneath or beside their homes or on the outskirts of settlements. But in this case, farmers from villages as far as 15 to 20 kilometers away scattered the defleshed bones of their dead in the upper chamber of Scaloria Cave. But why did they do it, and what does this tell us about how they viewed life and death?

To answer these questions, Robb's team performed detailed analyses of the skeletal remains, first excavated in 1978 and now at the University of Cambridge on loan from the Archeological National Museum in Manfredonia, and their context. The results showed that few whole skeletons were present in the cave—only select bones had been interred. Some of the bones had light cut marks, suggesting that only residual muscle tissue needed to be removed by the time of defleshing. That meant the remains were likely deposited as much as a year after death. 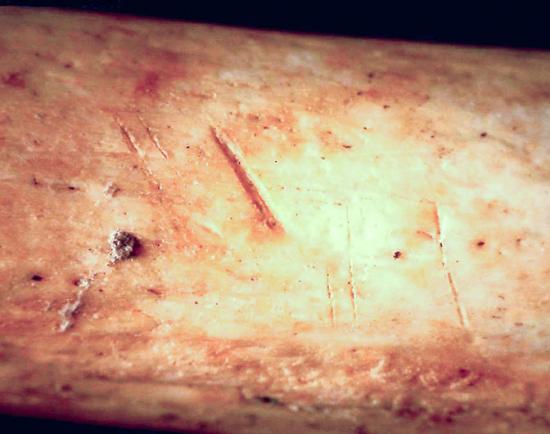 The light cut marks evident on this fibula shaft show that little effort was required to remove the muscle tissue.University of Cambridge

Given the evidence, Robb and his team theorize that the defleshing process was part of a long, multistage burial. It isn't known what happened to the bodies in the early stages of these rites, though the lack of animal damage on the bones suggests that they weren't exposed to the elements, meaning that they were either sealed away or buried deep in the ground. What is clear is that the rites ended up to a year later, when select bones were cleaned of their remaining flesh and placed in the cave. This likely marked the end of the mourning process—the deceased's social significance among the community of loved ones now severed by this final transformation into cleaned bones. Relatives were then free to place the remains among other discarded items, animal bones, and broken vessels, perhaps as a symbolic gesture, showing that the transition from life to death was now complete.

Robb contrasts that process with present-day mourning rituals: "Death is a cultural taboo for us. People in our culture tend to shun death and try to have brief, once-and-for-all interactions with the dead. But in many ancient cultures, people had prolonged interaction with the dead, either from long, multistage burial rituals such as this one, or because the dead remained present as ancestors, powerful relics, spirits, or potent memories."

But what was the significance of the cave? Robb and his team further hypothesize that due to the similarity in appearance, bones might have been regarded as equivalent to stalactites. Indeed, noticing the connection between water dripping from the cave ceiling and stalactite formation, the Neolithic Italians had placed vessels beneath the falling liquid to collect it; as the substance that created "stone bones," it likely had a spiritual power. It’s thus possible, the team says, that the cleaning process and deposition in the cave was a way for the living to return the bones to their stonelike origins, both in appearance and location, completing a cycle of incarnation.

The team's comparison between long bones and stalactites is “extremely suggestive," says Mark Pearce, an archaeologist at the University of Nottingham in the United Kingdom, who was not involved in the study. "We know that caves have a great ritual importance in Italian prehistory, and specifically the water that drips from stalactites." Pearce adds: "The Scaloria Cave, with its difficult-to-access lower cave, was clearly a special place for the people of the Tavoliere, and we may imagine that it was thus a suitable place for final death rituals."

"It may be that they regarded life as originating from forces or substances underground," Smith says, "or they may have believed subterranean places to be where the soul traveled to after death. Either way, it gives a level of insight into Neolithic beliefs that we wouldn’t normally have access to."