Archaeologists have found the oldest engravings of letters ever to be discovered in central Germany, officials from the area announced on Thursday. 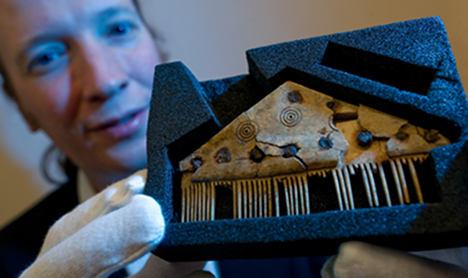 The ancient letters, called runes, were scratched onto a 12.5 centimetre-long comb by Germanic settlers in the second century, scientists working on the site in Saxony-Anhalt believe.

The letters spell out “Kama”, meaning comb, the president of the state Heritage and Archaeology Management Office, Sven Ostritz, said on Thursday.

It is the oldest ever example of runic writing to be found in that part of the country, he added.

Germanic languages used the runic alphabet to write before the Latin alphabet became widespread. The earliest runic engravings have been dated back to 150AD.

Engravings from a similar period have been found in the Märkische Schweiz region near Berlin, and in western Ukraine, Ostritz revealed.

The comb, which is made from deer antler, was lifted out of its resting place nearly two metres below the ground several years ago. But it had been tucked away until recently, when scientists cleaned it off and put it under a microscope to examine the writing.

It had to be painstakingly re-assembled by the team though, as it was originally found broken into pieces. Historians have been working on the ancient Germanic settlement where the comb was found since 2002.