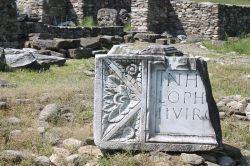 Part of the inscription over the portal in the forum in Ulpia Traiana Sarmizegetusa.  OttisP, Wikimedia Commons

Featuring numerous temples, an amphitheater, a large forum with associated buildings, gladiator schools, massive fortifications and several necropolises, casual observers might think that they were walking among ruins not far from the center of ancient Imperial Rome herself. But this site is located on a plain at the foot of the Retezat Mountains in Southern Transylvania, Romania. Here, archaeologists have been systematically uncovering an ancient Roman center that, during its heyday in the 2nd century A.D., commanded the countryside as the capital of the conquered Dacian provinces.

After the mighty Dacians were finally defeated in 106 A.D. by the forces of Trajan's legions, a city was built upon the very location where a major battle between the Roman legions and the Dacian troops took place. Known as Ulpia Traiana Sarmizegetusa, with an area of 30 ha, it sported a population of perhaps as many as 25,000 people during the 2nd and 3rd centuries, built on the rich commerce of gold, iron, and copper, among the other resources of Dacia. Its monuments were constructed of high quality limestone and marble, valued so highly over the centuries that Medieval churches and castles to this day still display fragments from the Roman Sarmizegetusa bas-reliefs and statues that once graced the original city. The forum itself was quarried for lime for more than a hundred years, as later Medieval builders began to construct more with cement and less with brick.

Archaeologists first begun excavating the site from 1924 to 1936 under the direction of Prof. C. Daicoviciu. Beginning again in 1973, excavations continued under Daicoviciu, along with professors D. Alicu and I. Piso. Most recently, investigations have been carried out by the Archaeological Techniques and Research Centre (ArchaeoTek - Canada) and the Center for Roman Studies (University Babes-Bolyai in Cluj, Romania) under the direction of professors Andre Gonciar and Ioan Piso. Their team of professionals and students will return during the summer of 2012 to explore more of its features.

Says Gonciar, et. al., "At the present time, less than 15% of the site has been exposed, revealing a cosmopolitan and rich metropolis. Our excavation will continue the exploration of the Forum and associated temples as well as identifying domestic living structures outside the public plazzas. We will also survey the city necropolises and possibly start work on a funeral household enclosure." [1]

Ancient structures already identified include the Amphitheater, a gladiator school, the Goddess Nemesis Temple, the Liber Pater Temple, temples to Aesculap and Hygia, a temple basilica, the "Big Temple", a temple to the god Silvanus, glass blowers workshops, the Horreum, thermae, the Forum, and a procurator's office.

ArchaeoTek is currently seeking students and volunteers who would be interested in becoming a part of the current excavations, taking place from July 8 to August 11, 2012.  Those interested should visit the website at http://www.archaeotek.org/roman_capital_of_the_dacian_provinces.