Lead archaeology workers supervise as their colleagues dig a newly-discovered tomb dating back to around 1100 B.C. at the Saqqara archaeological site

Antiquities Minister Mohamed Ibrahim said that the tomb belongs to a guard of the army archives and royal messenger to foreign countries. Ibrahim said the Cairo University Faculty of Archaeology's discovery at Saqqara adds "a chapter to our knowledge about the history of Saqqara."

Ola el-Egeizy of Cairo University said the tomb contains "very nice inscriptions" of the funerary procession and the afterlife of the deceased.

The tomb was found near another one dating back to the same period belonging to the head of the army that was discovered in the previous excavation season. That tomb was larger but much of what remains is mud bricks as "most of its stone blocks were stolen and many of them are in museums all over the world," said el-Egeizy. Because of the blocks, archaeologists had long known that the tomb existed though it was not uncovered until recently.

Saqqara was the necropolis for the ancient Egyptian city of Memphis and site of the oldest known pyramid in Egypt.

Egypt's vital tourism industry has suffered in the wake of the 2011 uprising that toppled autocratic leader Hosni Mubarak.

A stray dog scavenges for food at the historical site of the Giza great Pyramid, right, and the Bent Pyramid of Dahshur, left, at the Saqqara archaeological site 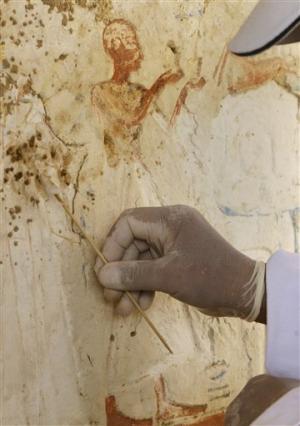 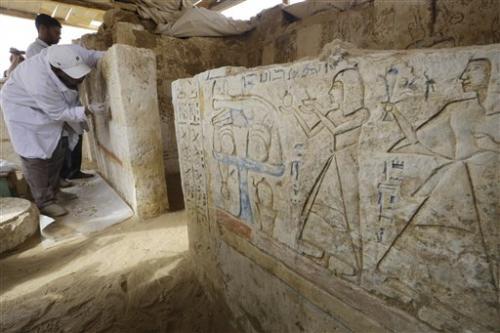 An Egyptian conservator cleans limestones at a newly-discovered tomb 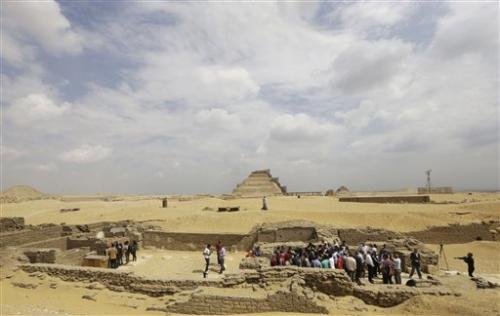 Archaeologists and journalists gather at a newly-discovered tomb 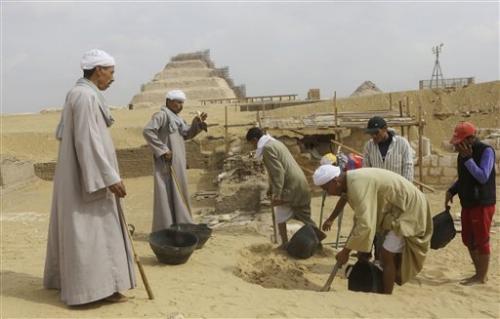 Archaeology workers dig at the site of a newly-discovered tomb

An Egyptian archeology worker covers limestones at a newly-discovered tomb