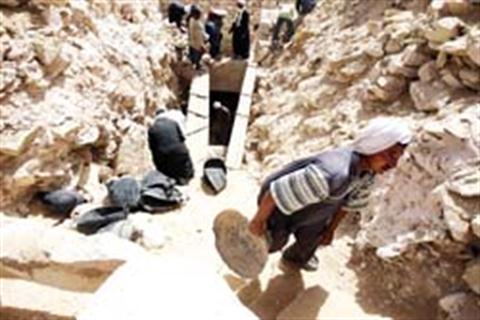 Archaeologists have unearthed the intact sarcophagus of Egypt’s Queen Behenu, a 4,000-year-old artifact made from rare pink granite. The sarcophagus was found inside her burial chamber near her pyramid in Saqqara, chief archaeologist Zahi Hawass has announced.

The Old Kingdom queen’s chamber was badly damaged except for two inner walls covered with spells meant to help her travel to the afterlife, he said in a statement.

Ancient Egyptians believed that the souls of royalty could fly to heaven, or alternatively use stairs, ramps and ladders with the help of religious spells. Such engraved spells, known as Pyramids Texts, were common in royal tombs during the 5th and 6th Dynasties, Hawass said.

“Pyramid Texts were first discovered inside the burial chamber of King Unas’s pyramid at Saqqara, the last king of the 5th Dynasty,” he added.

The well-known necropolis of Saqqara, 30 km south of Cairo, served the nearby city of Memphis and was scoured in ancient times by thieves.

The 5th Dynasty is generally understood to have lasted from 2465 to 2323 BC, while the 6th Dynasty ran from 2323 to 2150 BC. The Old Kingdom collapsed soon after, amid social upheaval.

Philippe Collombert, who headed the French mission that excavated Behenu’s remains, said the team found her sarcophagus within the sprawling necropolis of Pepi I at Saqqara.

“It is a well-preserved granite sarcophagus engraved with the queen’s different titles, but says nothing about the identity of her husband,” Collombert said.

Archaeologists are unsure whether Behenu was the wife of Pepi I or Pepi II, both 6th Dynasty rulers.

One side of the sarcophagus bore the hieroglyphic inscription “the king’s wife and beloved.”