Saqqara (Egypte): King Tut's Wet Nurse May Have Been His Sister 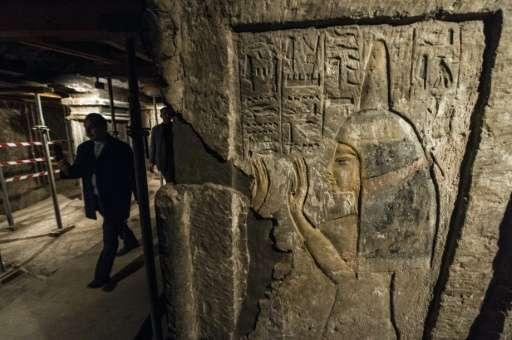 A relief inside the tomb of Maia, the wet-nurse of legendary Egyptian boy king Tutankhamun, in Saqqara, about 35 kms south of Cairo on December 20, 2015
An archaeologist said Sunday that Maia, Egyptian pharaoh Tutankhamun's wet nurse, may have actually been his sister Meritaten, reviving speculation about the identity of the mother of the boy king.
DNA tests have proved that the pharaoh Akhenaten was the father of Tutankhamun, but the identity of his mother has long been a mystery.

On Sunday, Egyptian officials and French archaeologist Alain Zivie unveiled Maia's tomb to journalists ahead of its opening to the public next month.

The tomb was discovered by Egyptologist Zivie in 1996 in Saqqara, a necropolis about 20 kilometres (12 miles) south of Cairo.

Maia was the wet nurse of Tutankhamun, whose mummy was found in 1922 by renowned British Egyptologist Howard Carter in the Valley of Kings in Luxor along with a treasure trove of thousands of objects.

"Maia is none other than princess Meritaten, the sister or half-sister of Tutankhamun and the daughter of Akhenaten and Nefertiti," Zivie told AFP.

He said his conclusion was based on the carvings of Tutankhamun and Maia on the walls of Maia's tomb.

"The extraordinary thing is that they are very similar. They have the same chin, the eyes, the family traits," he said.

"The carvings show Maia sitting on the royal throne and he is sitting on her" lap, said Zivie, director of the French Archaeological Mission of Bubasteion.

Similar carvings were in Akhenaten's tomb at the Tel el-Amarna archaeological site in modern-day Minya province where the pharaoh had his capital city, he said.

A DNA analysis in 2010 revealed that Tutankhamun was the son of Akhenaten, who temporarily converted ancient Egypt to monotheism by imposing the cult of sun god Aton.

The tomb of Akhenaten has carvings showing the death of princess Maketaten—the second daughter of Akhenaten and Nefertiti, Zivie said.

"In these scenes there is a woman who is breast-feeding a baby, and this woman shown as a wet nurse is princess Meritaten, the eldest daughter of Akhenaten," he said.

The mummy of Meritaten has not been found, but Antiquities Minister Mamduh al-Damati said on Sunday it could be in a secret chamber in Tutankhamun's tomb.

Archaeologists are currently scanning Tutankhamun's tomb in the Valley of Kings after British archaeologist Nicholas Reeves claimed that it has a secret chamber.

Reeves says the chamber could be the burial site of Nefertiti, whose mummy also has not been found.

"All these possibilities exist. Step by step we will be able to better understand the time of king Tutankhamun," Damati said.