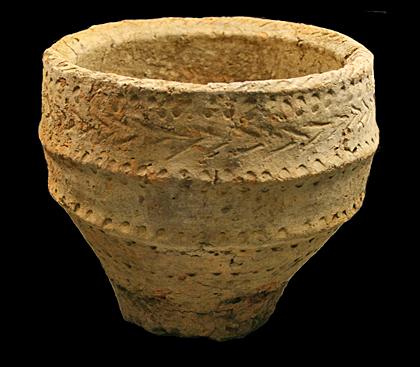 A cist burial spotted hanging from a cliff on the edge of Scotland came from the ceremony of a Bronze Age adult cremated swiftly after their death, say archaeologists investigating the bones of a body whose skull carried a tumour.

Cracks and warping of the remains, which belonged to someone of indeterminate gender, suggest the body was still fleshed when it was cremated in a service accompanied by a tonne of burning wood.

The bones were secured in a daring rescue mission on the eroding face of a sand cliff at Sannox, on the Isle of Arran, where experts used a mechanical cherry picker and balanced on harnesses to remove two cists.

“All the bone was uniformly white and in a similar condition, which is evidence for a hot cremation pyre reaching temperatures in the order of 650 to 950 degrees,” says Iraia Arabaolaza, who led the team responsible for the excavation.

“It is likely that the cremation occurred soon after death.

“The smaller average weight of the bones in this cist, as well as the absence of axial [head and trunk] bones, is a common trait in some Bronze Age cremations.

“The lack of remains such as substantial amounts of charcoal associated with a pyre also reinforces the idea of a selected burial.”

Some of the bones may have been kept back or lost to erosion on the cliff.

Arabaolaza says a mysterious green stain, examined once the team had moved the remains to Glasgow, could be copper – demonstrating poor preservation conditions.

A food vessel and a sharp knife, made with Yorkshire flint and found with the body, served both as tools and grave goods.

“Although the burial customs of the Scottish early Bronze Age varied greatly, across the period as well as from region to region, scale-flaked and plano-convex knives clearly represent an important tool,” says Torben Bjarke Ballin, a lithic expert from the University of Bradford.

“The Scottish scale-flaked and plano-convex knives are most likely to also be sickles, and they probably carried out the same work as the crescent-shaped sickles of southern Britain.

“Although the piece from Sannox Quarry does not have any gloss, small flat chips were detached along its edge, indicating that it had been used prior to deposition in the cist.”

“In the suite of Bronze Age funeral ceramics, food vessels are not as common as beakers and urns and are less well known,” she explains.

“In mainland Scotland, they are frequently associated with cists with cremations.

“Although the Sannox pot follows some of the decorative motifs of Scottish food vessels, such as its bevelled rim and the slightly uncommon herring bone design, its decoration is in character comparable to those from the east coast.”

This symbolism from the other side of the land may prove that the objects were used in material exchanges.

“The paired and single incised half-circle motives can be mirrored in many places – not least York, Northumberland, Angus, Fife, and Kinross,” says Ballin Smith.

“In spite of its cracks, the pot is intact but there are significant areas of damage. These are mainly around the base, the body of the vessel just above it, and the bottom of the pot internally.

“The damage is partly due to a loss of surface caused by spalling and erosion of the fabric, partly because the vessel may have lain on the floor of the cist, and possibly because of how it was used and fired.

“The appearance of the vessel suggests that it may have stood in a hot fire. There is no sooting from flames, but the base of the pot indicates heat erosion.

“One interpretation could be that the vessel was positioned on the edge of the funeral pyre, perhaps in order to fire it during the cremation of the body.

“In doing so, it received damage as it was not protected from direct flames or very hot ashes.”

One of the bones from the burial – radiocarbon dated to between 2154 and 2026 B – was rounded into a button shape, suggesting an osteoma benign tumour which may not have caused its bearer “distress or symptoms” during their life.

At a time when wood was a scarce resource in Scotland, the size of the pyre shows the importance given to funerals by Bronze Age society. A “good ceremony” could have enhanced the status of the individual or their community.

Cist 1 shows the location of the cremation and imprint of the food vessel, facing south© GUARD Archaeology Ltd 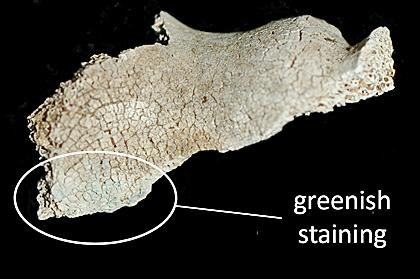