Sandby borg ringfort is beautifully located on the east coast of the island of Öland, right by the shore of the Baltic Sea. Photo courtesy of Kalmar County Museum. 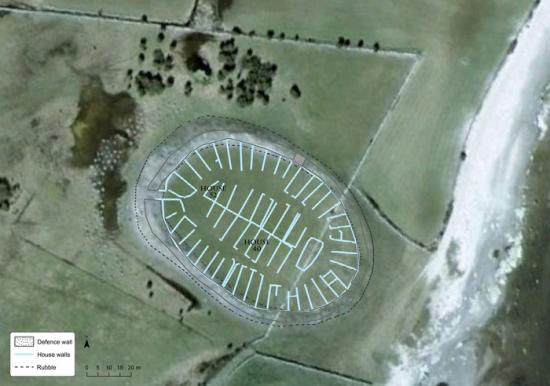 Satellite image of the Sandby borg ringfort, with the layout of the houses and the defence wall marked. The two houses mentioned in the text are indicated. Courtesy of Kalmar County Museum and Andreas Viberg.

During the excavation of Sandby borg ringfort on the island of Öland, Sweden, a number of macabre finds were made. 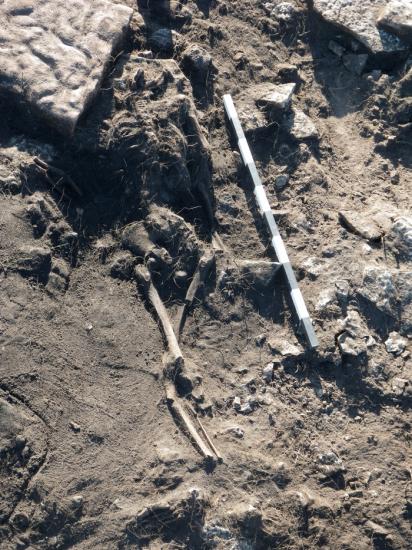 This skeleton of an old man was found lying across the large fireplace in House 52. Next to him, a humerus of a small child (estimated to around 2-5 years old) was found. Photo courtesy of Kalmar County Museum.

Skeletal remains from a small child were found in one of the houses in the ringforts central block. This is the first child to be identified among the victims of the massacre at Sandby borg.

- It is both frightening and sensational in the sense that prior to this find the results showed that there had only been adults in the ringfort when this horrific event took place, says Helena Victor, project manager at the Dept. of Museum Archaeology at Kalmar County Museum, Sweden. It sheds a whole new light on the massacre, she continues. 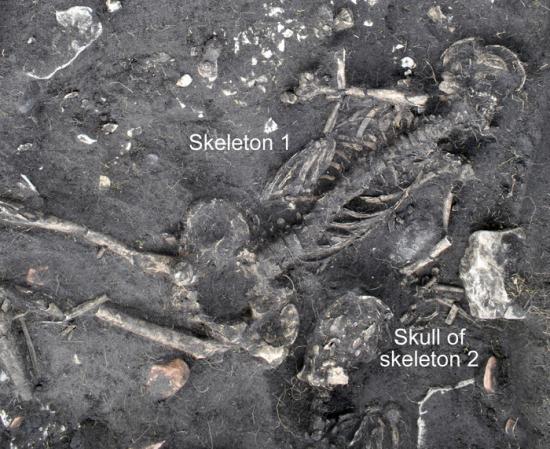 In house 40, the skeletons of two young men were found right inside of the door. Further into the house are more human remains, still awaiting excavation. Photo courtesy of Kalmar County Museum

The excavation was carried out in September by the Department of Museum Archaeology at Kalmar County Museum, in cooperation with students from Linnaeus University.

Osteological analyses have now been made of the bones that were uncovered and experts confirm that they belong to two individuals, one of which is a child of an estimated age of 2 to 5 years. In the same house the skeleton of a middle-aged, 50 to 60 year old man was found lying on its stomach in the central of the building.

- What we can see by looking at the position in which the skeleton was found is that he was probably struck down and fell prone into the burning fireplace, says Clara Alfsdotter, osteologist at the museum of Bohuslän who conducted the analysis. Tragically he’s been left there, lying in the burning fireplace, which is a terrible fate.

The Sandby borg research was started in 2010. Despite the fact that less than 3% of the ringfort have been excavated, the remains of over ten individuals have been uncovered and all of them show indications to having died in a violent massacre that took place around 1500years ago. The researchers are now pleading for the public to donate so that the work can continue.

- We need funding to be able to continue, Helena Victor explains. So we’re launching a crowdfunding campaign, where one of the rewards for funding will be to join us in the trench at the next Sandby borg excavation. It is the first time in Sweden that an archaeological crowdfunding campaign has been started.

The Sandby borg crowdfunding campaign will run between November 27 and December 31,2014 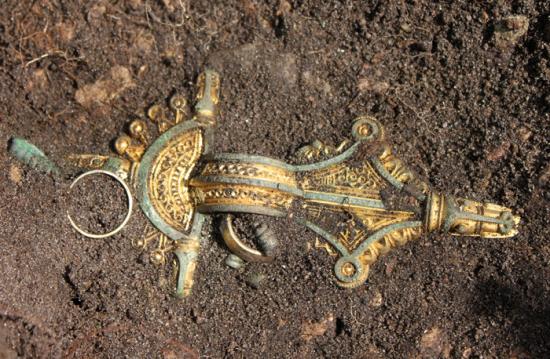 Photo from the excavation of one of five caches of 5th century jewellery found at Sandby borg in 2010. Photo courtesy of Jan-Henrik Fallgren.