Discovery helps change ideas about the roles of elite women in Moche society. 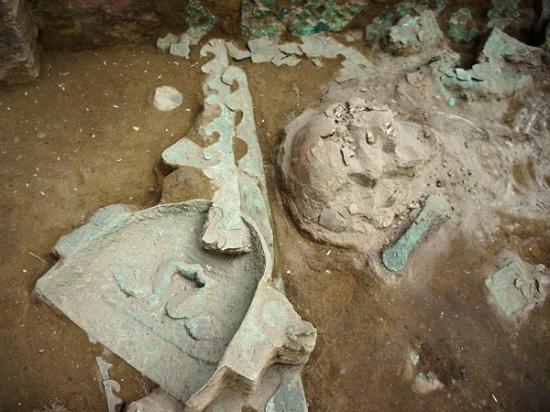 A funerary mask of copper is uncovered near the priestess-queen's skull.

Some 1,200 years ago, a prominent Moche woman was laid to rest with great pomp and ceremony. Now archaeologists have uncovered her tomb along with clues that testify to her privileged status and the power she once wielded.

The discovery—made over the last couple of weeks at the site of San José de Moro in the Jequetepeque River valley of northern Peru—is one of several that have revolutionized ideas about the roles women played in Moche society.

In about A.D. 750 this revered woman was buried in a large chamber some 20 feet (6 meters) beneath the ground. The earthen walls of her tomb were painted red, and large niches held offerings of ceramic vessels. Two adults, presumably sacrificed female attendants, were buried with her along with five children.

Her skeleton rested on a low platform at one end of the chamber and was adorned very simply with a bead necklace of local stones. Beside her lay an important clue to her identity—the kind of tall silver goblet that appears in Moche art in scenes of human sacrifice and blood consumption. Such vessels have only been found previously in the tombs of powerful priestess-queens, so that was likely the role this woman played in life.

The elaborate decoration of the coffin is another clue that this was someone important. The box itself was probably made of wood or cane, which has long since decayed. Copper plaques once covered it, tracing out a typical Moche design of waves and steps that's now visible to one side of the skeleton where the wall of the collapsing coffin fell flat.

Near the skeleton's head lay a copper funerary mask, which probably sat atop the coffin originally. And at the foot of the burial lay two pieces of copper shaped like sandals. "The coffin was anthropomorphized," explains excavation director Luis Jaime Castillo Butters. "It became a person." 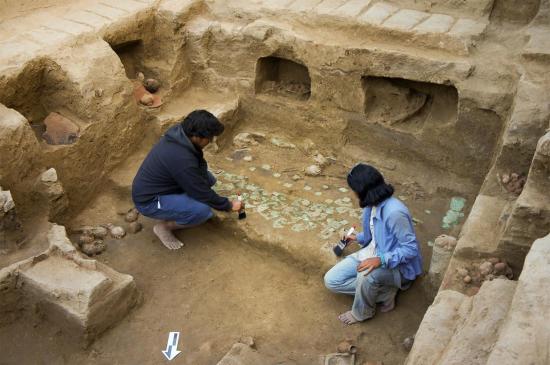 The coffin must have been part of the show of a public funeral, as with famous people today. The deceased probably ruled one of the Moche communities nearby. During her funeral, her coffin—with a face and feet that represented the person inside—was carried to its final resting place in a grand procession that included an honor guard of warriors and musicians who played rattles, drums, whistles, and trumpets.

This is the eighth elite female burial to be found since excavations began at San José de Moro in 1991. The accumulating evidence has convinced archaeologists that the site was an important ceremonial and pilgrimage center between A.D. 600 and 850, and that the priestess-queens who were buried there played a large role in governing the political and spiritual affairs of the region—a huge shift in thinking about the structure of Moche society.

"Twenty-five years ago we thought that power was monopolized by male warrior-priests," says Castillo Butters, a professor of archaeology at the Pontificia Universidad Católica del Perú and a National Geographic grantee.

Back then experts were influenced by discoveries like the tomb of the Lord of Sipán, a ruler who died at the age of 30 in about A.D. 250, at the height of the early Moche culture. His body was adorned in gold and buried in an elaborate mausoleum that also held human sacrifices.

Peruvian archaeologist Walter Alva described this figure as a supreme monarch in his story about the tomb and its artifacts in the October 1988 issue of National Geographic magazine: "Accepting homage and tribute, performing priestly duties himself, and standing confidently at the apex of the social pyramid with absolute power of life and death over his subjects, he must have seemed like a demigod."

Additional finds made in recent years, however, have put women at the top of the Moche power structure as well. A tattooed female mummy, for example, unearthed at the site of El Brujo in 2005, was buried with traditional symbols of power such as massive ceremonial war clubs and nose rings with fierce designs—men carrying war clubs or heads pecked by condors. She also wore tokens of great wealth, such as her 15 necklaces made of lapis lazuli, quartz crystal, silver, and a gold-copper alloy. The archaeologists who uncovered her believe she was likely a warrior queen.

At San José de Moro, the evidence uncovered year after year seemed to suggest that power in that area was exclusively in the hands of women.

But in 2009 the tomb of a priest came to light. He was about 45 years old when he died, and he was buried with ornaments of gold-plated copper, necklaces of semi-precious stones, and a crown colored with the green patina of aged copper. Near him lay the remains of five other people, probably sacrificed to accompany their lord in death.

This site, then, with its elite burials of both genders, suggests that men and women alike filled positions of power in the neighboring communities.

The Moche, it turns out, did not have a centralized society, as once believed. They were more a loosely affiliated group of communities, each with its own ways of doing things. In this valley, it's likely that women were in charge of many of the communities and men were in charge of others. Those roles also carried over into the great beyond.

"The Moche seem to have believed that the identities that gave prominence to these individuals in life were to be maintained after death," notes Castillo Butters. "Accordingly, they imbued their burials not only with symbols of religion and power, but [also] with the artifacts and costumes that allowed the priest and priestesses to continue performing their ritual roles in the afterlife."