A Maya pyramid in what is today El Salvador was built in the wake of a giant, climate-cooling volcanic explosion to 'guard against future eruptions', a study has found.

The AD 539 'Tierra Blanca Joven' eruption of the Ilopango volcano — today a crater lake — was the largest in Central America in the last 10,000 years.

It is thought to have released some 20 cubic miles of of volcanic material, or 'tephra', into the air, coating the surrounding area in deposits some 1.6 feet thick.

Archaeologist Akira Ichikawa of the University of Colorado Boulder studied the Campana pyramid at San Andrés, in the Zapotitán valley, 25 miles from Ilopango.

His analysis revealed that the structure was built out of tephra from the eruption just 5–30 years after the devastating event — and completed within 80 years.

The timing suggests the pyramid was built in response to the volcano — which like mountains, Dr Ichikawa noted, were sacred in the Mesoamerican worldview.

The Campana pyramid at the San Andrés site in the Zapotitán Valley, with the San Salvador Volcanic complex — behind which lies Lake Ilopango — shown in the background

'Due to the catastrophic magnitude of the [Tierra Blanca Joven] eruption, scholars have considered that many sites were abandoned and it took a long time to reoccupy affected areas,' explained Dr Ichikawa.

However, he explained, the timing and sheer scale of the Campana pyramid's contraction indicates that people quickly returned to occupy the San Andrés site, transforming it into the centre of occupation in the surrounding valley.

The Campana structure consists of a pyramidal form — some 43 feet (13 metres) in height — build atop a 23 feet (7 metres) tall platform.

The total structure had a volume of some 1,165,384 cubic feet (33,000 cubic metres), making it the largest structure in the valley at the time it was built.

Besides its likely religious function, Dr Ichikawa believes that the construction of the Campana pyramid may have also served a social function.

The significant construction effort may have helped to bring people — both survivors of the volcano and newcomers to the region — together.

Alongside this, the monumental effort may have helped the Maya rulers who commissioned the construction to reinforce their status and power, which may well have been challenged by the preceding volcanic disaster.

This hypothesis may also account for why a similar spate of construction occurred around 620 AD — in the awake of a second volcanic eruption from Loma Caldera, a mere 3.7 miles (6 kilometres) to the north of San Andrés.

According to Dr Ichikawa, the smaller but arguably more elaborate Acropolis structure at San Andrés was likely built after the Loma Caldera eruption. 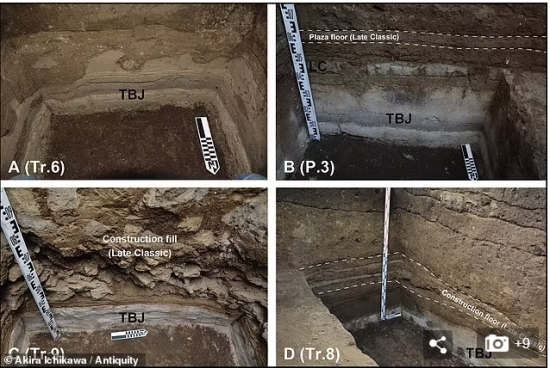 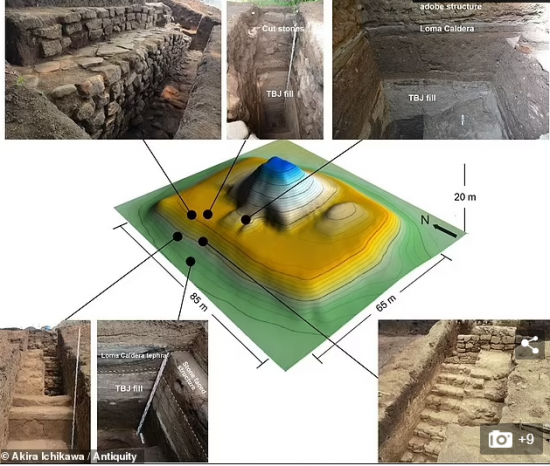 The Campana structure consists of a pyramidal form — some 43 feet (13 metres) in height — build atop a 23 feet (7 metres) tall platform. The total structure had a volume of some 1,165,384 cubic feet (33,000 cubic metres), making it the largest structure in the valley at the time it was built. Pictured: a 3D model of the Campana pyramid, showing the location of excavations

'Sites like San Andrés can teach us about human creativity, innovation, adaptation, resilience and vulnerability in the face of such events.'

The full findings of the study were published in the journal Antiquity.