A Nagoya University researcher and his leading international research group discovered a Great Platform built with different kinds of stone at the archeological site of San Andrés, El Salvador, and challenged the prevailing theory regarding the sociocultural development of Southeastern Maya frontier. 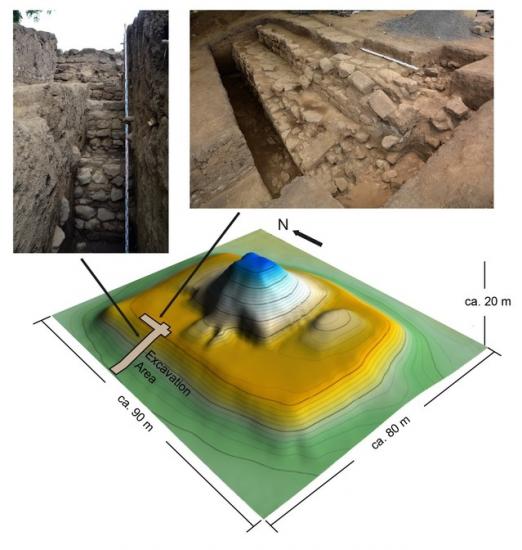 Across the centuries, forming cooperative networks beyond cultural boundaries has been a way to overcome natural disasters.

San Andrés is located in the Zapotitan Valley, El Salvador, known as Southeastern Maya zone. Archaeological investigation conducted during 40's and 90's has shown that San Andrés had long human occupation beginning from the Middle Preclassic (ca. 600 BC) until the Early Postclassic (ca. AD 1200), in which had role as political, economic and religious center during the Late Classic period (AD 600-900). As San Andrés has been affected by numerous explosive eruptions--at least three or four--during the past two millennia, archaeologists have been interested to understand the role of volcanic eruptions in human history.

Between February and May of 2016, the research group led by Assistant Prof. Akira Ichikawa of the Institute for Advanced Research and at the Graduate School of Letters, Nagoya University, made a new discovery that allowed them to reconsider the recovery process from the volcanic eruption of Ilopango (ca. AD 400-450), which was one of the greatest Holocene eruptions in Central America. Assistant Prof.Ichikawa explained: "We have discovered a masonry platform just above the ash caused by the Ilopango eruption in San Andrés, which could prove that people reoccupied in such a devastated area even immediately after the enormous disaster occurred."

He noted that the discovery of masonry architecture (4 tiered platform, measuring probably ca. 70 m north-south, 60 m east-west, and ca. 6 m) was conclusive in this study. In the Southeastern Maya periphery, especially present western El Salvador, monumental architecture had been principally constructed by earthen material during the Preclassic to Classic period (ca. 800 BC to AD 900). The type of platform mentioned above is very similar to that of Quelepa located in now eastern El Salvador and had other cultural affiliation in the Precolumbian era. This evidence indicates that San Andrés's new construction technology was introduced by external cultural connection.

Assistant Prof. Ichikawa speculated that the social group lived in the Quelepa may have given a hand to help the people in the fully devastated Zapotitan Valley soon after a volcanic eruption occurred. Since the Great Platform found in this study could be considered as a monumental architecture to commemorate the people in the affected area, people in these areas must have had some cooperative relations beyond their cultural boundaries.

San Andrés has been investigated in terms of its relations mainly with Copán, the representative Classic Maya center located in western Honduras. "In this study we opened the gate by broadening our perspectives to the peripheral border beyond the cultural boundaries," Assistant Prof. Ichikawa added. He expects that an understanding of the cultural development in peripheral areas will reveal the historical dynamism across multicultural societies.