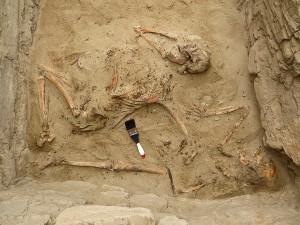 Archaeologists in Peru are hailing the find of a tomb thought to belong to the Chimu culture, a people that were eventually conquered by the Incans.

The tomb, located in the Samanco archaeologial complex, contains six skeletal remains two of which are women sacrificed to honor the noble occupants of the tomb.  The four other bodies are thought to be of elite Chimu musicians and weavers.  Women were typically sacrificed so that they could accompany the men into the afterlife.

The 75-acre Samanco archaeological complex is located in the coastal desert of Northern Peru in the Ancash region.  The complex contains excavations of Andean ruins dating as far back as 800-100 BCE.  Archaeologists hope to better understand early urban seaside communities through the work done at Samanco.

This discovery made in August and just announced, is the first Chimu-Incan find in the complex.

The Chimu culture thrived in the northern coast of Peru until its conquest by the Incas in 1470.  The tomb is believed to date back to the 15th or 16th century.  The archaeological treasure trove not only includes human remains but fine textiles, jewelry and musical instruments.

Archaeologists and Peruvian historians are excited about the find, viewing it as a ‘window’ into how Incans treated cultures they conquered.  The tomb with its multiple burial chambers was created around the time Incans were taking over the Chimu culture.

Archaeologist Matthew Helmer who is credited with the find noted, “Although the Chimú warred with the Inca before being conquered, grave goods like this indicate that the Incas allowed previous coastal beliefs to continue rather than impose their own pantheon during the consolidation of their empire.”

The Chimu culture is defined by its high-level craftsmenship producing intricate works of art using precious metals and weaving complex textiles from alpaca wool.  The Incans thought enough of these conquered people that they kept the Chimu’s political system amongst other things.

Other Chimu finds have included female sacrifice.  In 2009, the remains of a woman buried alive were found in Chan Chan, the oldest mud archaeological complex in the Americas..  It is thought she was killed to appease Mother Nature and guarantee good crops.  The woman’s feet had been amputated before she was hanged and her body thrown near a wall. The gestures on her face suggest that she screamed before she died, according to archaeologist Raul Sosaya.