What is worth more: a unique historic site or gold that lies within it?

That is a question Georgians have been grappling with since their government gave permission for industrial excavation to start at what scientists claim is the oldest known gold mine in the world.

The archaeological area, known as Sakdrisi, is a small grassy hill in the Bolnisi region, in the picturesque foothills of south-eastern Georgia.

For 10 years Professor Thomas Stoellner, a leading specialist in mining archaeology from the University of Bochum, Germany, has been studying the archaeological record at Sakdrisi together with his Georgian colleagues.

"When we went to do the first survey we found hammer stones - typical mining tools - thousands of them," says Prof Stoellner, who believes that tunnels inside the hill date back 5,400 years.

Archaeologist Thomas Stoellner shows some of the artefacts that have been found in the mine.

"At once I realised the importance of the site. When we got the first value carbon dates, and they were around 3,000 BC, it was clear that this was an exciting find which had never occurred in pre-historic mining."

Recently discovered artefacts including a unique set of spiral gold earrings found in neighbouring Azerbaijan can be traced to Sakdrisi, according to Prof Stoellner.

The Georgian government used to share this excitement and Sakdrisi was a protected cultural heritage site. But that status has been removed, and Professor Stoellner's views are being challenged.

"It's not proven that Sakdrisi is an ancient gold mine - it's just an assumption," Georgia's Prime Minister Irakli Garibashvili recently said at a meeting with university students.

Does that change in position have much to do with the mine's potential as a source of employment and revenue in the region?

Sakdrisi sits on prime territory licensed to a commercial gold mining company, RMG Gold. The Russian-owned company is a major investor in the Georgian economy. 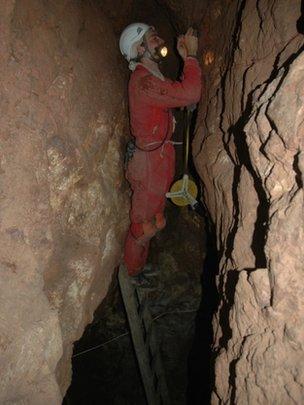 Mr Garibashvili was keen to emphasise this: "The investor has already invested $300m [£178m; 219m euros] in the Georgian economy. This company has 3,000 employees and those people represent 3,000 families."

According to RMG's commercial director, Soso Tsabadze, their products, which include copper concentrates and gold alloys, make up about 10% of Georgia's total exports.

Although Sakdrisi hill occupies only nine hectares out of 193 hectares of licensed territory, RMG says it is vital for their operation.

"We estimate the area holds a deposit of 14 tonnes of gold, 30% of which lies immediately under the hill." says Mr Tsabadze.

"Initially Sakdrisi was cut out of the licensed territory because of the archaeological site," he explains.

"We sent experts to study how far from the site we could mine. They concluded that we would not be able to use drill and blast methods within one kilometre of the protected site.

They then posed a question: is this really an ancient archaeological site? This was a legitimate question because there was no scientific evidence."

To study the issue, the government appointed a commission, which ruled that there was no scientific proof that Sakdrisi was a gold mine and that its historic status had been granted in "gross violation" of Georgian law.

But, RMG director Soso Tsabadze admits, dealing with environmental issues is not a priority. He says the company has already encountered losses due to delays in production over Sakdrisi.

And so, the work is under way. Mud tracks have already been formed in the ground by trucks and digging equipment passing back and forth.

To see the historic site destroyed will be a loss for the scientific community, says Prof Thomas Stoellner. He believes the oldest stages of mining have yet to be discovered: "In Western Europe we solve such problems by doing commercial rescue archaeology - excavate everything, study the details and then, okay, if there is a decision of the government, exploit the field."

The government may have already made its decision but protesters have vowed to stay on. They are hoping an independent panel of experts will be invited to judge whether this ancient mine is worth more than the gold that lies within it.