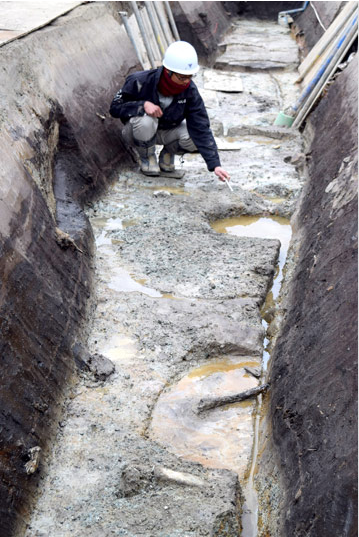 The dig site at the Nisanzai Kofun burial mound in Sakai, Osaka Prefecture, where the new boreholes for bridge piers were discovered (Junji Murakami)

Researchers have found evidence of a massive wooden bridge at an ancient burial mound here that they surmise was used for final rites of perhaps an emperor, and then torn down.

The Sakai city government said Jan. 27 the walkway across the moat was the largest of its kind in the Kofun period (late third to seventh centuries). The keyhole-shaped Nisanzai Kofun burial mound dates to the late fifth century and could be the final resting place of an emperor or an individual of imperial lineage.

"It seems likely that people stood by on both sides of the bridge while a temporary casket for the body was taken into the tomb," said Taichiro Shiraishi, who heads the Chikatsu Asuka Museum in Kanan, Osaka Prefecture. "It gives us clues as to how ancient burial rites were performed at giant burial mounds.”

Researchers discovered five new boreholes for bridge piers as part of an excavation project that kicked off last autumn to determine the size of the walkway. A dig in 2013 had turned up 26 boreholes placed 12 meters wide around the slope of the mound as well as four boreholes across the moat.

The five additional pier holes found on the bank of the moat opposite of the tomb each measured between 66 and 92 centimeters in length.

Based on the evidence, archaeologists believe the bridge was 12 meters wide, at least 45 meters long and stood 5 to 6.5 meters from the bed of the moat.

Experts with the city government suggested it was built solely for a ceremonial funeral procession that carried the body of the person to be entombed, probably an individual of exceptionally high rank.

The bridge probably aligned with the center of the tumulus, and the earth at the dig site showed that the walkway was removed soon after it was erected at the final stages of the construction of the burial mound or after it was completed.

“It is unlikely that a structure of this kind was unique to this burial mound," Shiraishi said. "If they get the chance, we hope researchers will investigate other large tombs as well.”

The walkway dwarfs other examples from the Kofun period, such as the one at the Sendai-Nomi ruins in Komatsu, Ishikawa Prefecture, which is believed to have been 2.7 meters wide and 16.1 meters long.

Excavations have not been undertaken of moats in larger tombs like the one for Emperor Nintoku in Sakai and another for Emperor Ojin in Habikino, Osaka Prefecture, the nation’s largest- and second-largest kofun mounds, respectively. The existence of ceremonial bridges in these tumuli is yet to be confirmed.