Antiquities Minister, Dr. Mamdouh Eldamaty declared the The Durham/Egypt Exploration Society /Ministry of Antiquities team working at Sais - Nile Delta, excavated part of the magazine storerooms of the late Ramesside period. They discovered a complete assemblage of pottery food storage and preparation vessels within a large magazine of around 6m by 6m and a similar set of vessels in a neighbouring magazine, which still remain to be excavated. 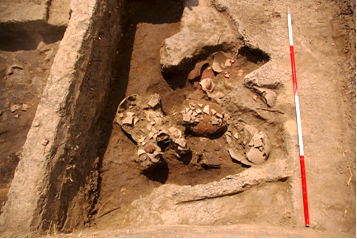 Eldamaty added that outside this domestic area a series of circular mud features were noted, perhaps the bases of storage silos for grain or perhaps tree-pits for special kinds of fruit tree or plants. 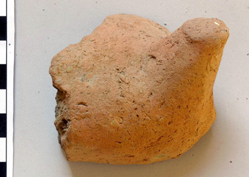 On the other hand, Head of Ancient Egyptian Archaeology Sector Dr. Mahmoud Afify said that the discovered The pottery jars were all in fragments but included globular cooking vessels, Canaanite amphora, ‘meat-jars’ and large Red Egyptian amphorae dating to the late 20th Dynasty.

Mission’s Director, Penny Wilson elaborated that The ceiling of the magazine had collapsed on top of the magazine in a catastrophic event which may have affected the whole Ramesside city, burying it under rubble. Late in the Third Intermediate Period a large walled structure was built upon the rubble and several phases of domestic activity were recorded either within or outside this large mud-brick wall. Large hearths associated with the houses were used for some time, being refurbished and reused when they became too full of ash. Throughout the material, some earlier broken fragments from the Old Kingdom can be found in the rubble attesting to the long time period of settlement at Sais.

Adding that, although the glorious city of Dynasty 26 is almost completely destroyed, the finds in the northern part of the Sais site confirm that there are two earlier cities preserved, complete but in many fragments. They could represent the powerful New Kingdom temple centre and the early Third Intermediate settlement of the Great Kingdom of the West. Further work on the pottery will enable more precise dating to be confirmed.