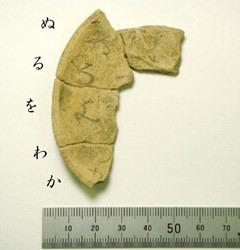 The inner side of the pieces of Hajiki pottery unearthed at the Saiku ruins in Meiwa, Mie Prefecture, shows the handwriting of the Iroha poem. (Photo courtesy of the Saiku Historical Museum)

The oldest known hiragana version of the “Iroha Uta,” a Japanese alphabet poem, has been discovered on pieces of ancient earthenware, a museum here has announced.

The Saiku Historical Museum said Jan. 17 that pieces of old “Hajiki” pottery, excavated from the Saiku ruins in Meiwa, Mie Prefecture, and dating back to the late Heian Period (from the late 11th century through the early 12th century), bore handwritten hiragana characters from the Iroha poem on their surfaces. Saiku was the palace of the sacred Saio princesses who served at Ise Shrine.

“It’s valuable material showing that court culture, in which hiragana was taught using the Iroha poem, had already spread through the area,” said an official at the museum.

According to the museum, four pieces of dish-shaped Hajiki pottery were unearthed in a survey of the area between June and November 2010. The pottery pieces, measuring 6.7 centimeters by 4.3 centimeters when combined, bore part of the Iroha poem — “nu ru o wa ka” on the top and “tsu ne na ra” on the bottom. The hiragana characters were written in ink. 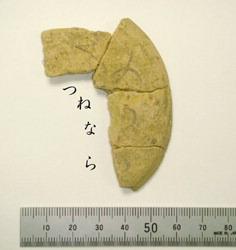 The outer side of the pieces of Hajiki pottery unearthed at the Saiku ruins in Meiwa, Mie Prefecture, shows the handwriting of the Iroha poem. (Photo courtesy of the Saiku Historical Museum)

Previously, a wooden strip bearing the Iroha poem — unearthed in Hiraizumi, Iwate Prefecture, which dates back to the late 12th century — was the oldest known example of the poem in hiragana.

Saiku was the dwelling of the Saio, who served at Ise Shrine on behalf of the emperor from the Asuka Period through the Nanbokucho Period. Ladies-in-waiting who served the Saio also lived there, along with other officials. It is believed that there was a custom of learning characters using discarded earthenware.

Because the handwriting is exquisite and remains on both sides of what was ordinary earthenware, museum officials speculate that the characters were written by ladies-in-waiting to memorize hiragana.

“The find indicates that the culture (of learning characters through the Iroha poem) had spread widely, even among ladies-in-waiting who were in relatively lower positions,” said a museum official.

The pottery pieces will be put on public display between Jan. 21 and March 11.