The site of a gruesome massacre some 1,200 years ago in southwestern Colorado is yielding new evidence of the severity, and the grisly intensity, of the violence that took place there.

First excavated in 2005 near the town of Durango, the site known as Sacred Ridge was in some ways a typical early Pueblo settlement, a collection of pithouses situated not far from similar communities, dated to around the year 800.

But digs at Sacred Ridge soon revealed a scene of visceral conflict that archaeologists are still trying to piece together.

Two of the settlement’s pithouses, it turned out, were filled with nearly 15,000 fragments of human bone — having been intentionally crushed to pieces — along with ceramic vessels and stone tools that retained residues of human blood and muscle tissue.

It was the largest assemblage of processed and mutilated human bones ever found in the Southwest.

More than a massacre, the scene at Sacred Ridge betrayed evidence of at least 33 people, men and women alike, having been not only butchered and burned, but, according to new research — also tortured.

Anna Osterholtz, a graduate student in anthropology at the University of Nevada, Las Vegas, was part of the team that  investigated Sacred Ridge and has been analyzing and interpreting its grim remains.

Her latest research has focused a part of the anatomy that’s often overlooked — the feet — but her findings have uncovered evidence of apparently brutal torture.

The fragments of foot bones she studied bore the hallmarks of hobbling — the practice of immobilizing a victim’s feet, in this case by breaking the ankles — as well as severe beating on the soles, an act whose only purpose could have been to cause pain. 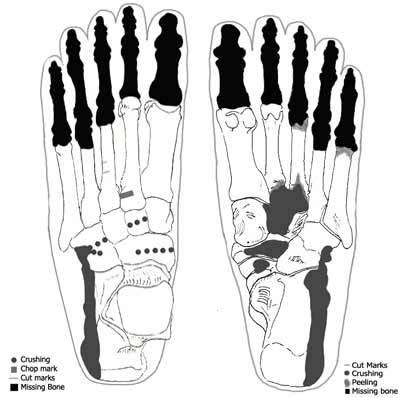 Analysis of foot bones from Sacred Ridge revealed severe trauma on both the top (left) and bottom (right) of victims’ feet, including evidence of having been cut, chopped, crushed, and in some cases, beaten so severely that the outer layer of bone tissue peeled off. (Courtesy A. Osterholtz/Kiva)

While this does little to explain the assailants’ motivations, Osterholtz said, the evidence does suggest that widespread torture may have been used as a demonstration — a kind of performance meant to terrorize, warn, or otherwise subdue those at Sacred Ridge.

“I actually analyzed trauma on every portion of the body, ultimately examining almost 15,000 fragments,” she said.

Describing her findings recently in the journal Kiva, she wrote that she found evidence of violence “from the top of the head to the tips of the toes.”

“But the feet were really my introduction to this concept of performance,” she said in an interview, “because I couldn’t see a reason for the damage I was seeing in the foot bones other than torture.”

Her analysis began with the painstaking process of piecing together fragments of bone to reconstruct portions of the skeletal remains.

Of the 14,882 fragments recovered from the two structures at Sacred Ridge, Osterholtz identified 190 that were of foot bones. And of those, 49 fragments came together to form conjoins, or refitted segments of bones.

“All of the conjoins showed evidence of some sort of trauma, regardless of sex,” she said.

“Most of that trauma was in the form of crushing, cut marks, and chop marks.”

Pieces of the talus, or ankle bone, for example, showed signs of blunt-force trauma, suggesting repeated blows to the side of the ankle, while bones on the top of the foot revealed evidence of having been scraped, crushed and smashed.

Even more striking was the condition of bones from the sole of the foot, which appeared to have been beaten so severely that the outer layer of bone had peeled away in layers.

“Tool marks and fractures to the rest of the body’s elements had other explanations, including processing or perimortem trauma, but the tool marks and peeling on the foot elements would serve no such purpose, and would only have been useful in causing pain,” Osterholtz said.

Signs of such vicious treatment in such a specific sample suggests that the victims in the pithouses were singled out by their attackers, she said, perhaps as cautionary examples to others in the community.

“This type of trauma was not widespread outside of the commingled and fragmentary assemblage,” she said. “It was restricted to the pit structures with the fragmentary remains.

“This is one reason I think that hobbling and torture was used as a way of controlling the population before and during the massacre.”

In this way, the torture of the victims at Sacred Ridge might have functioned as a macabre kind of spectacle, intended to control the rest of the community, Osterholtz explained.

“Performance necessitates an audience, but who those witnesses are is an interesting question,” she said.

Understandably, the morbid scene at Sacred Ridge has been the subject of speculation among anthropologists and historians. Some have posited, based on the cut marks on the bones and the human residue found in cooking pottery, that the remains were evidence of cannibalism.

But Osterholtz and others point out that the sheer size of the bone assemblage is far greater than any ever associated with  humans having been eaten.

Similarly, some have theorized that the victims may have been executed as “witches,” a theory that has been used to explain evidence of human butchering at some other Puebloan sites.

But again, no such killings on this scale or with this degree of trauma have ever been recorded in the American Southwest, Osterholtz noted. 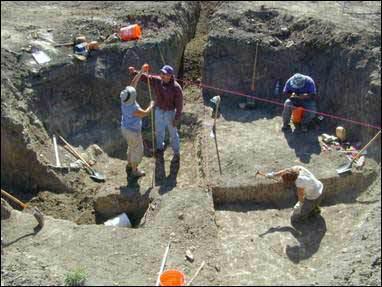 Sacred Ridge was excavated as part of the Animas-La Plata archaeological project, which investigated sites that would be affected by the creation of Colorado’s Lake Nighthorse.

However, earlier research of the victims’ teeth, by anthropologists James Potter and Jason Chuipka, analyzed ratios of the element strontium in their enamel to determine where the dead had come from.

The results showed that the victims had lived most of their lives in the region right around Sacred Ridge, and thus were not likely killed as invaders.

Instead, it may have been the interlopers themselves who killed the people of Sacred Ridge, Osterholtz said, having used torture as a means of subduing the local population.

“I started to think about what the purpose of causing pain would be, which led me to the idea of social control and the use of torture in modern conflict,” she said.

“I think that the witnesses were possibly other community members who may have simply heard the massacre going on.

“The witnesses may also have been future victims or initiate members of the aggressor’s social group.”

Whatever their intentions were, the assailants didn’t seem to have Sacred Ridge itself in mind as their prize.

“The radiocarbon dates from these assemblages have the latest dates from the site, so the massacre was likely one of the final activities at the site,” Osterholtz said.

Sacred Ridge was abandoned around 810, soon after the massacre.

“Assemblages such as Sacred Ridge are incredibly rare in the archaeological record, and the identification of possible hobbling and torture are even rarer,” Osterholtz concluded in her Kiva study.

“Given the massive social changes occurring during the Pueblo I period (including aggregation and architectural changes, the solidification of matrilineal descent groups, and possible ritual changes), the increase of social stresses would be a natural byproduct. This stress could have been mitigated through the use of performative violence.”