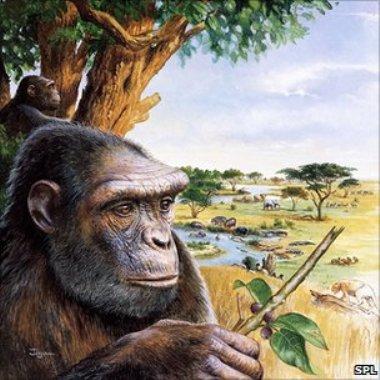 In 2001, a team unearthed remains of a seven million-year-old human-like creature - or hominid - known as "Toumai" at the central African site.

Its discoverers argue that Toumai is the oldest hominid known to science.

The fossilised skull of Toumai (which means "hope of life" in the local Dazaga language of Chad) was found in the Djurab desert by a team led by Michael Brunet of the University of Poitiers, France.

The position of a hole at the bottom of the skull called the foramen magnum suggests that Toumai (Sahelanthropus tchadensis) walked upright - an important signature of the human lineage.

The ancient fossil caused a worldwide sensation when it was unveiled in the pages of Nature journal in 2002.

However, the interpretation of Toumai as a human relative is controversial. The skull was distorted and, if any other parts of the skeleton happen to exist, none has yet been published in the scientific literature. It is also older than the date when genetics says that the human and chimp lineages diverged.

Nevertheless, palaeontologists have been busy studying the abundant fossil material unearthed at the site, steadily building a picture of the environment in which Sahelanthropus eked out its existence.

In Late Miocene times, this area of Chad must have had a lake, because palaeontologists have found the fossilised remains of fish, amphibians and crocodiles. 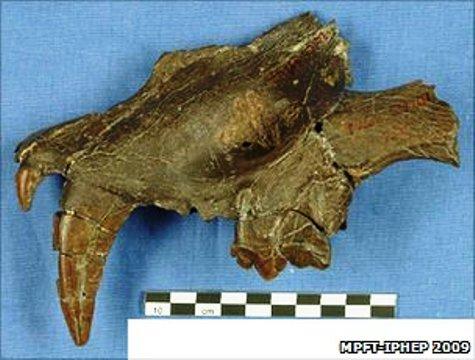 The sabretooths were about the size of present-day lions

But they have also found evidence of grasslands, gallery forest and a desert.

Researchers have discovered the fossilised remains of a wide variety of carnivorous mammals at Toros Menalla. Ending up in the sharp jaws of a predator must have been an ever-present threat for primates like Toumai.

Palaentologists had already reported finding remains of a large sabretooth cat from Toros Menalla known as Machairodus kabir which weighed in at 350-490kg.

The big cat remains were unearthed during recent field expeditions and have been identified as new species belonging to the genusLokotunjailurus and the genus Megantereon.

Patrick Vignaud, director of Poitier University's Institute of Palaeo-primatology and Human Palaeontology, told BBC News the cats were about the same size as modern lions.

He told BBC News: "Sabretooths hunted all mammals; bovids, equids... and primates. The interactions were also more 'psychological', exercising a stress on potential prey. We can't prove it but it's probably important because in that case, primates had to live near closed environments like gallery forest."

While ancient primates like Sahelanthropus tchadensis gave sabretooth cats a wide berth, they may also have depended on these big carnivores - and others - for their survival.

Sabretooths would have hunted large herbivorous mammals, and probably left enough meat on their kills for scavengers like the jackal-sized Hyaenictherium and perhaps even primates like Sahelanthropus.

Some researchers have proposed that Toumai is more closely related to chimpanzees or gorillas. Even if this were the case, the discovery would be of great significance, as virtually no fossil ancestors of these great apes are known from Africa.