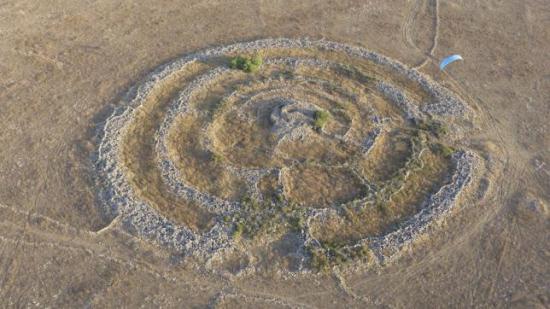 A general aerial view shows a prehistoric stone monument, known as Rujm el-Hiri in Arabic, meaning 'stone heap of the wild cat', as a paraglider surfs above it in this July 24, 2014 picture. REUTERS/CHEN KATZ

Driving past it, one of the most mysterious structures in the Middle East is easy to miss. The prehistoric stone monument went unnoticed for centuries in a bare expanse of field on the Golan Heights.

After Israel captured the territory from Syria in a 1967 war, archaeologists studying an aerial survey spotted a pattern of stone circles not visible from the ground. Subsequent excavations revealed it was one of the oldest and largest structures in the region.

Known as Rujm el-Hiri in Arabic, meaning the "stone heap of the wild cat", the complex has five concentric circles, the largest more than 500 feet (152 m) wide, and a massive burial chamber in the middle. Its Hebrew name Gilgal Refaim, or "wheel of giants", refers to an ancient race of giants mentioned in the Bible. 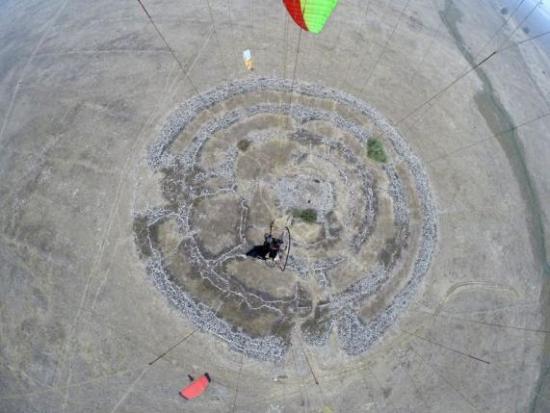 A general aerial view shows a prehistoric stone monument, known as Rujm el-Hiri in Arabic, meaning 'stone heap of the wild cat', as a paraglider surfs above it in this July 24, 2014 picture. REUTERS/CHEN KATZ

It is up to 5,000 years old, according to most estimates, making it a contemporary of England's Stonehenge. Unlike the more famous monument built with about 100 huge stones topped by lintels, the Golan structure is made of piles of thousands of smaller basalt rocks that together weigh over 40,000 tons.

"It's an enigmatic site. We have bits of information, but not the whole picture," said Uri Berger, an expert on megalithic tombs with the Israel Antiquities Authority.

"Scientists come and are amazed by the site and think up their own theories."

No one knows who built it, he said. Some think it might have been a nomadic civilization that settled the area, but it would have required a tremendous support network that itinerants might not have had.

There could be an astrological significance. On the shortest and longest days of the year - the June and December solstices - the sunrise lines up with openings in the rocks, he said.

Standing on the ground inside the complex, it looks like a labyrinth of crumbling stone walls overgrown with weeds. From on top of the five-meter-high burial mound, it is possible to make out a circular pattern. Only from the air does the impressive shape of a massive bull's-eye clearly emerge.

Shards of pottery and flint tools were found in various excavations to help date the site, Berger said. Scholars generally agree that construction started as early as 3,500 BC and other parts may have been added to over the next two thousand years.

The complex is in an area now used for training by Israel's military, but visitors can explore the walls and crawl into the 20-foot-long burial chamber on weekends and holidays.