At first the amazed Russian archaeologists thought the seal was Philistine or Aramaic. It's ancient Hebrew, and says 'Elyashib,' like seals found at fortress Arad. 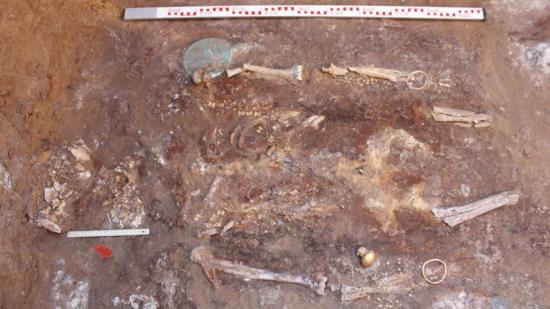 Sarmatian warrior woman's 2,000-year old grave, by Rostov-on-Don, showing jewelry and artifacts found in situ - and an Iron-Age seal inscribed in ancient Hebrew with the name "Elyashib".Institute of Archaeology of Russian Academy of Sciences

A spectacular find was made near the Black Sea this summer: Excavating the 2,000-year-old grave of a Sarmatian noblewoman, which miraculously hadn't been looted, the archeologists found a wealth of artifacts – including a carnelian seal with ancient Hebrew letters, centuries older than the tomb.

The woman's grave, located at Rostov-on-Don, was replete with burial offerings. The items, dating from the 1st century BCE to the 1st century AD, included wooden dishes and a cup lying by her right hand. By her feet were pieces of a bronze bucket with a floral design and a ladle with the head of the Gorgon, and by her pelvis was a gold vial with a lid and fossilized contents. Four clay vessels were found in the northeast corner of the tomb, as well as knives, over a hundred arrows and a harness, and an unfinished sword with an intricate handle inlay.

But the startling finding was the carved gem resting on her chest, inscribed with letters that were clearly from the ancient Levant.

Unversed in ancient Levantine languages, the archeologists assumed the writing was Phoenician or early Aramaic. But the letters are clearly ancient Hebrew. The unusual artifact was first noticed by archaeology bloggers Jim Davila and Aviv Benedix, who suspected the writing was a form of paleo-Hebrew. Their suspicions were confirmed by Prof. Christopher Rollstone of Georgetown Univeristy, an epigraphy expert. 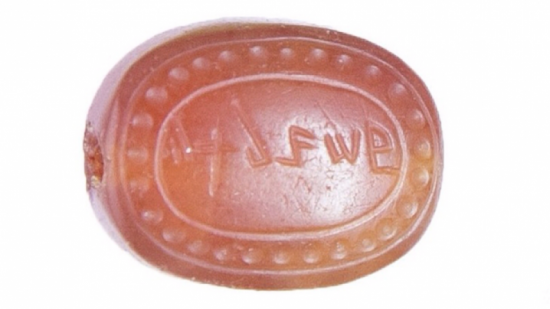 The seal of Elyashib, bizarrely found in the 2,000-year old grave of a Sarmatian warrior woman.: Institute of Archaeology of Russian Academy of Sciences

The discovery was made by a Russian Academy of Sciences' Institute of Archaeology team, led by Roman Mimokhod.

The Sarmatian people originated in Central Asia and migrated northward to the Ural mountains between the 6th-4th centuries BCE. By the 2nd century BCE, they had conquered the Scythians and most of Southern Russia. Their women were known to have fought alongside men: some scholars think that it is they who, even though they kept both breasts intact, inspired the Greek tales of the Amazons.

“The script is the Old Hebrew script. It would be dated paleographically to the 8th century BCE, not later," says Rollston, who has however one qualification:  "The [letter] shin bothers me, though.  It's not a good 8th-century form (rather a pretty bad one), though the rest of the forms are standard 8th-century BCE forms.”

What the writing says is simply the name "Elyashib," son of Oshiyahu, whom we know as the commander of an isolated Judean fortress, Arad. His name has been found before, Rollston points out – from ostraca (pottery sherds), and on no less than three other seals, found in the ancient fortress of Arad. One is apparently made of carnelian, like the Sarmatian discovery. The 18 Elyashib letters also found there date to the 8th century BCE.

How might a Judean gemstone have made its way to a Black Sea warrior woman's collection?

Being small, pretty and usually carved out of gems or semiprecious stones, seals were known to have been collected and traded in the ancient world. Some were thought to contain magical amuletic powers.

There are many cases of seals of many different periods being found together in various excavations and burials. This example however may be the furthest it has occurred, time and geography wise, as the Israelite seal itself predated the noblewoman by at least 700 years.

The remote Judean desert fortresses were situated on trade routes. And that might be how one of the seals bearing Elyashib’s name made its way out of Judah, eventually reaching the grave of a Sarmatian warrior woman far, far away.